Visiting the Cinque Terre for a wonderful Italian Experience?

Village-hop the hidden treasure of the Italian Riviera.  The quaint villages of the Cinque Terre are carved into the cliffsides.

Cinque Terre’s five villages date from the early medieval period.  Monterosso, the oldest, was founded in AD 643, when beleaguered hill dwellers moved down to the coast to escape invading barbarians.  Riomaggiore came next, purportedly established in the 8th century by Greek settlers fleeing persecution in Byzantium.  The others are Vernazza, Corniglia and Manarola.  Much of what remains in the villages today including several castles and a quintet of illustrious parish churches, dates from the late High Middle Ages.

Buildings aside, Cinque Terre’s unique historical feature are the steeply terraced cliffs bisected by a complicated system of fields and gardens that have been hacked, chiselled, shaped and layered over the course of nearly two millennia.  So marked are these artificial contours that some scholars have compared the extensive stone walls to the Great Wall of China in their grandeur and scope.

With its lovely natural harbour, pastel coloured houses and seaside piazzetta Vernazza is quaint and beautiful in equal measures.   Vernazza was founded about 1000 A.D. and was ruled by the Republic of Genoa starting in 1276. The medieval castle, Belforte, was built in the mid-1500’s, primarily to protect the village from pirates.  An ideal way to arrive to this breathtaking village is by sea. The tiny port is surrounded by subtle colourful pastels and the charming piazza is lined with good restaurants and bars.  The village is surrounded by very steeply-terraced olive groves which are said to produce among the finest olive oil in the country.

Enjoy the view from the Doria Castle, built in the Middle Ages to protect the village from pirates. Another important historical structure in Vernazza is the beautiful Church of Santa Margherita di Antiochia, erected in 1318 over a pre-existing building. Lined with cosy cafes, craft shops and wine bars, Vernazza’s main street Via Roma links the seaside Piazza Marconi with the railway station and hides a little jewel of a chapel: the Chapel of Santa Marta. Side streets lead to a maze of narrow and steep alleyways, where amazing sea views pop at every turn. 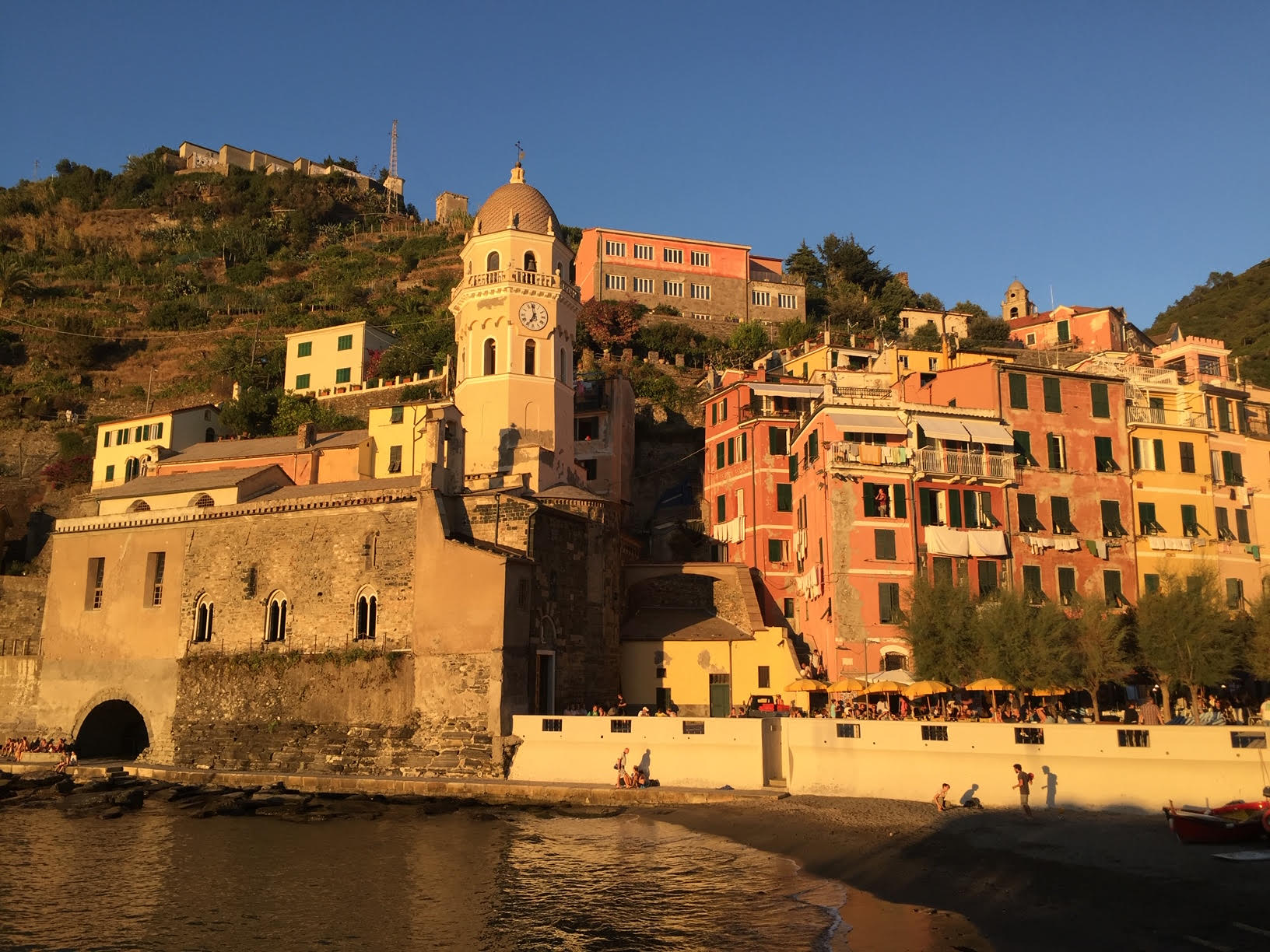 Should you find yourself in Vernazza or in the vicinity of the village on July 20, don’t miss the Feast of Santa Margherita, during which you can taste a lot of local specialities (white wines, pesto sauce, craft beers and enjoy a spectacular fireworks display.

About an hour’s steep uphill walk from the railway station is the Sanctuary of Nostra Signora di Reggio, built in the Romanesque period and surrounded by centuries-old trees. The path that leads up to this sanctuary is punctuated with the Stations of the Cross and offers breathtaking views over the bay and the green terraced hills. Vernazza’s tiny city beach is off Piazza Marconi and gets very crowded with families and children during the Summertime; a new pebble beach, created by the flood of 2011 and ideal for those who prefer a more secluded location, can be reached by walking through a rock hewn passage. You can pick Vernazza of course to hike the trail that is part of the Cinque Terre National Park and connects all five villages; from the small harbour, you can also take boat trips along the coast and visit one of the other five villages Riomaggiore, Manarola, Monterosso al Mare.  You can also go further afield via a boat trip up to Portofino and Portovenere. 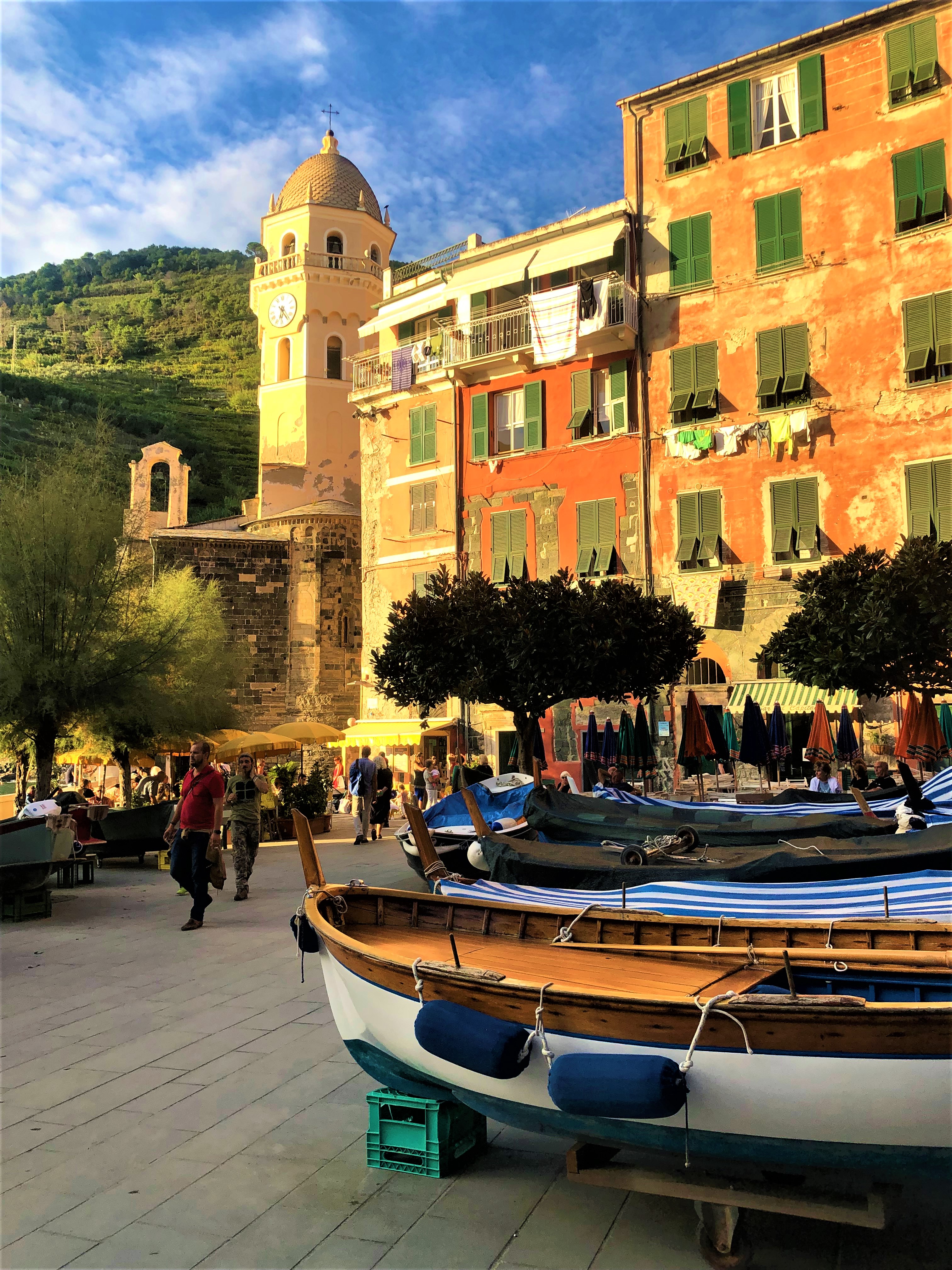 What to See & Do in Vernazza:

Church of St. Margaret of Antioch:

Manarola is known for its pastel-shaded houses crowded impossibly up the sides of the prominent headland of rock.   The village has charm in the bucket loads and it is a photographers paradise particularly if you take a short walk past the harbour along up to Punta Bonfiglio. 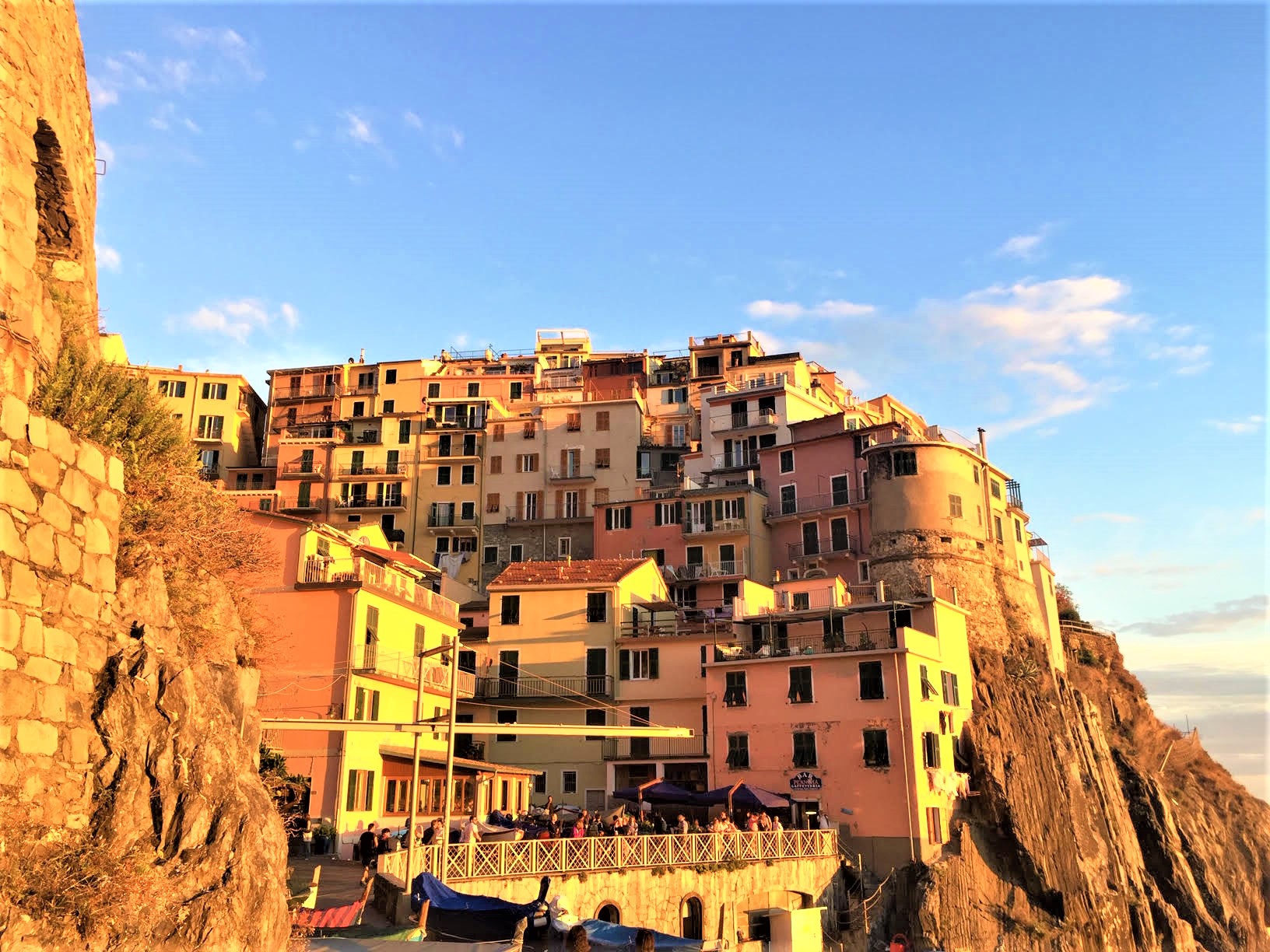 Visitors can enjoy a drink in a bar between the village’s cemetery and the sea. Everywhere is the scent of the lemon trees, thyme, rosemary and Mediterranean maquis; the grapevines – grown on terraces – embrace the village in a tight hug.

There are some fantastic boutiques and restaurants that line Via Renato Birolli which is the main thoroughfare from the train station down to the quaint harbour.  The local wine, called Sciacchetra, is especially renowned; references from Roman writings mention the high quality of the wine produced in the region.

What to See & Do in Manarola:

Monterosso al Mare dates back to the Middle Ages.  In order to protect the village from the frequent pirate attacks, a great number of fortifications were constructed at this location during the Middle Ages; remains of these fortifications can be admired in the old village, where three defensive towers still stand today.  Monterosso al Mare is divided into two sections by a tunnel of about 10 meters. The Old and the New. characterised by the typical tower homes in varying pastel shades, the town is one of the largest and it was this reason which almost kept it out of the “Cinque Terre.” It is now considered a part of the UNESCO World Heritage Sites and makes up part of a national park. 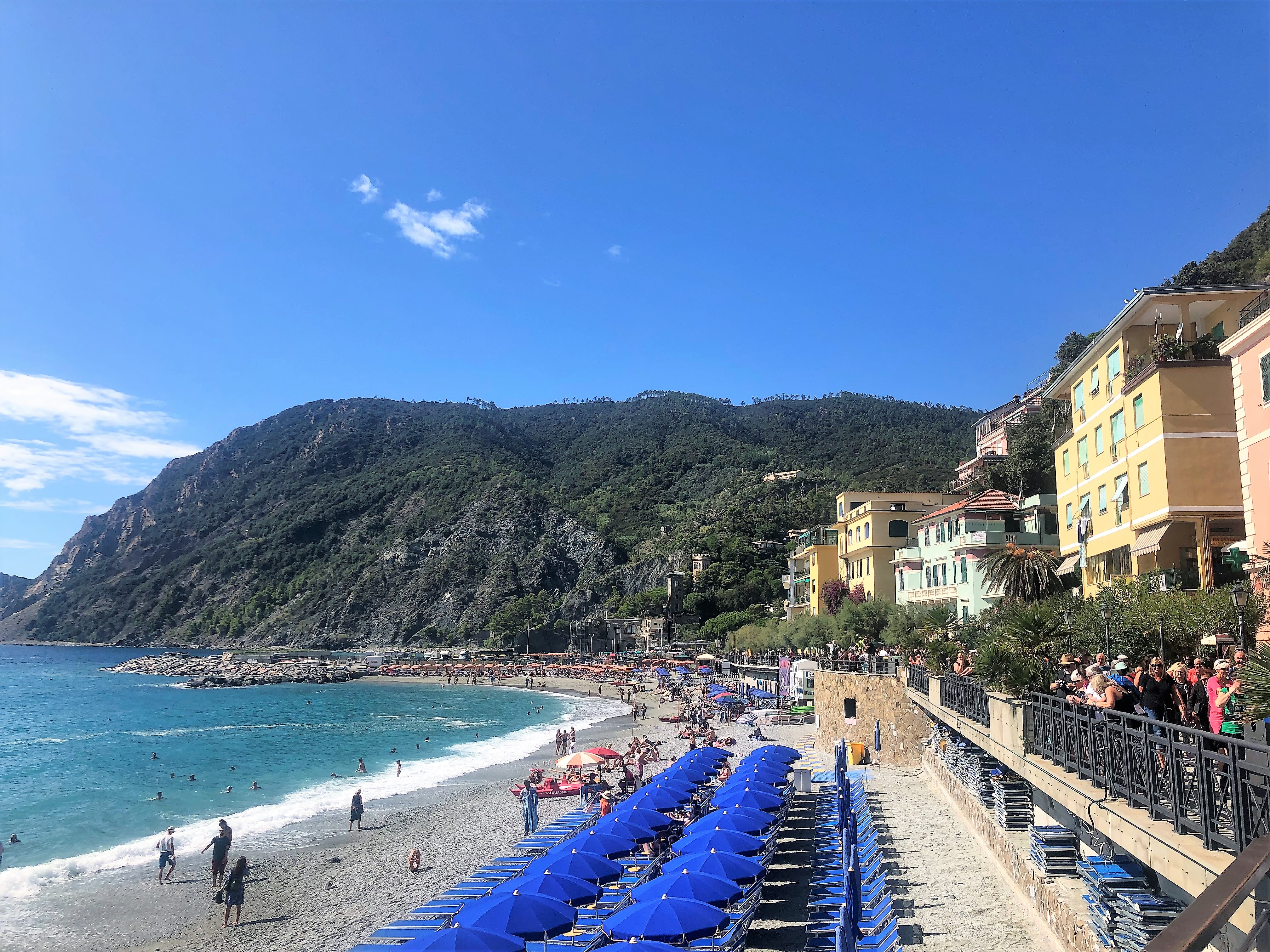 The old part of Monterosso is dominated by the walls of the ancient fortress, the remains of Fieschi Castle and the Aurora Tower. Other prominent features are the Church of St. John the Baptist (built between 1244 and 1307) and the Capuchin Monastery (17th century), visible everywhere in the area. Like all the other Cinque Terre villages, Monterosso has brightly coloured houses and narrow alleyways; after a pleasant day spent on the beach or hiking the trails of the Cinque Terre National Park, visitors can come here and enjoy an aperitivo in the cool evening breeze or dine in one of the many delicious restaurants. On a visit to the village, don’t forget to taste the famous Monterosso anchovies and order at least a glass of Sciacchetrà, a sweet white passito wine produced in the Cinque Terre region. 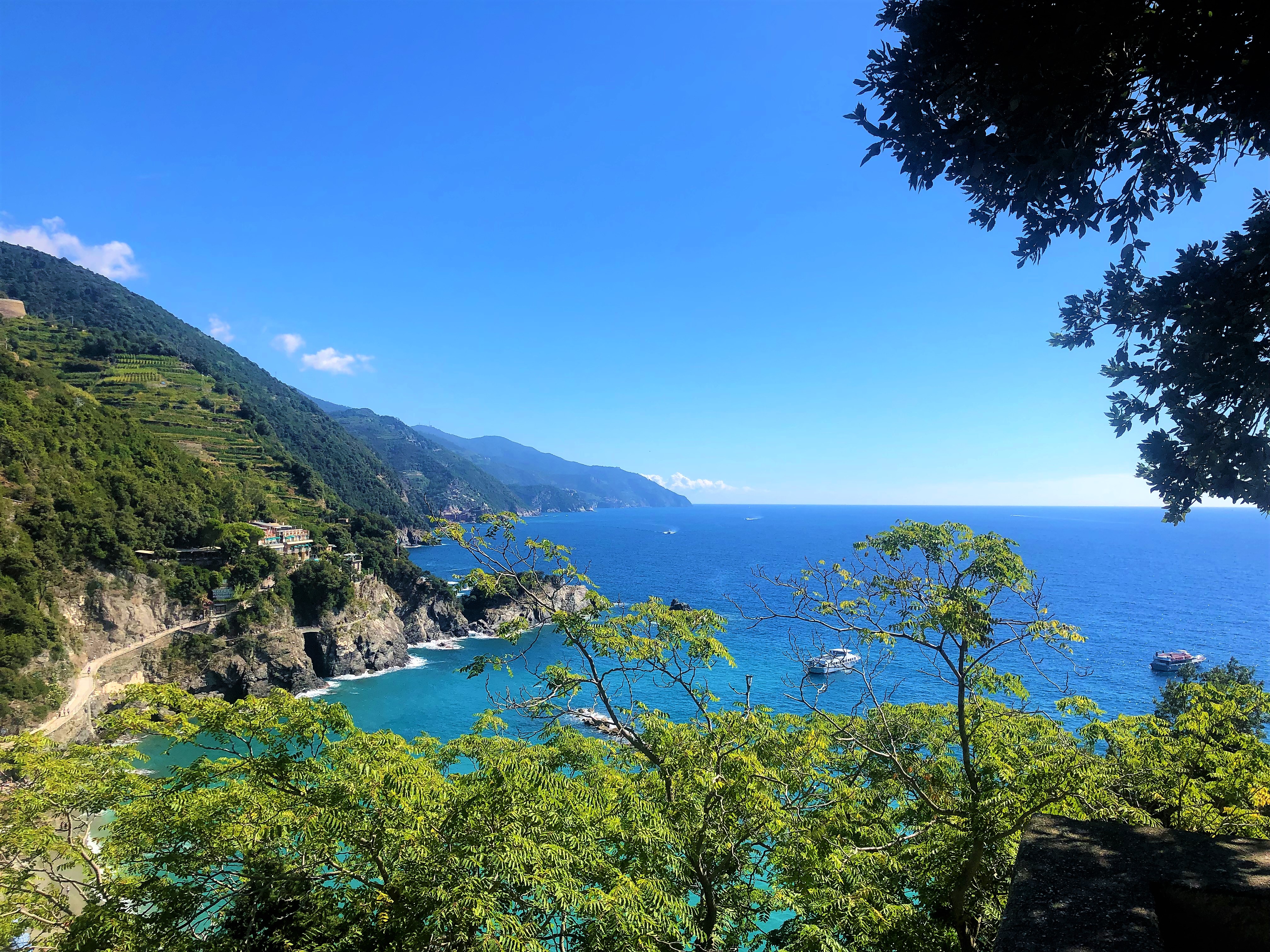 What to See & Do in Monterosso:

Church of St. John the Baptist:

Riomaggiore is known for its colourful stone houses that seem stacked on top of one another, and its harbour filled with traditional fishing boats.  Riomaggiore is a wonderful place to enjoy fabulous vistas and slowing down to the pace of Italian village life. Stroll along the main street of the village that leads down to the sea, where a small marina framed by lovely pastel houses is filled with brightly hued fishing boats. 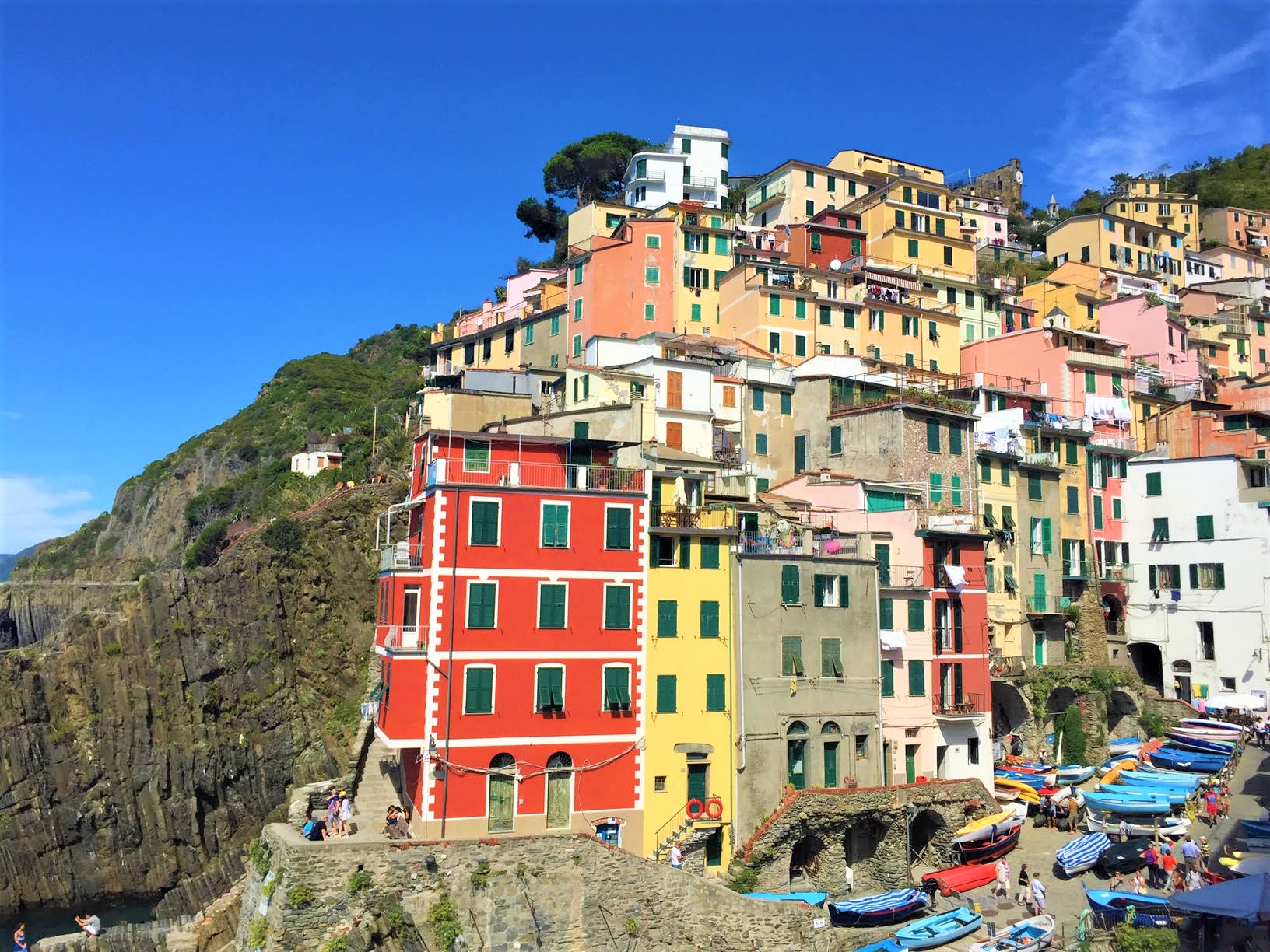 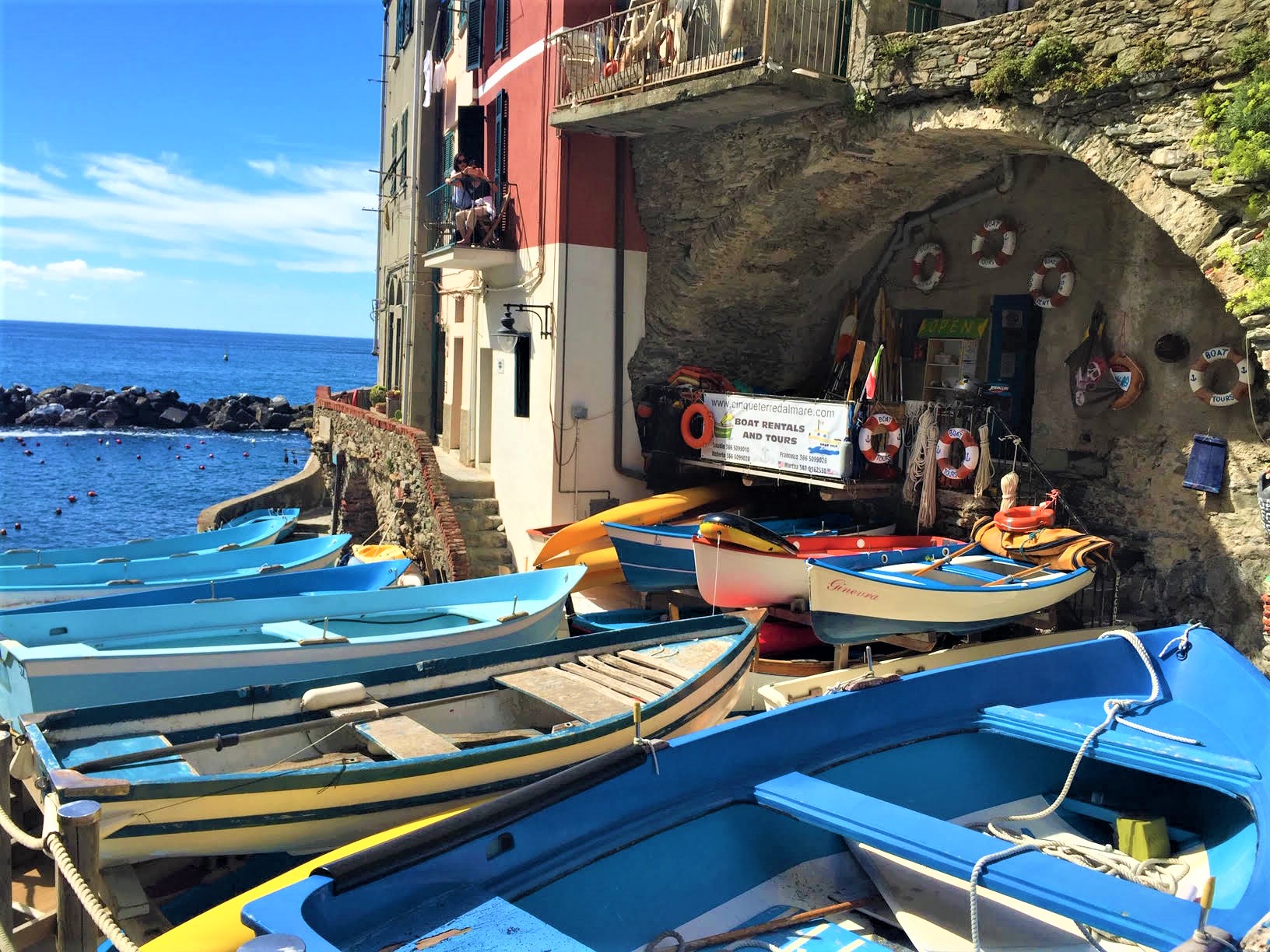 What to See & Do in Riomaggiore:

The Oratory of Saint Rocco:

The village of Corniglia differs significantly from the others of the Cinque Terre due to its elevated position with respect to the sea.  To reach it you have to go up the ‘Lardarina’, a long brick staircase consisting of 33 ramps for a total of 382 steps.  If you conquer the steep slope you will be awarded with magnificent panoramic views over the Cinque Terre, particularly towards Manarola. 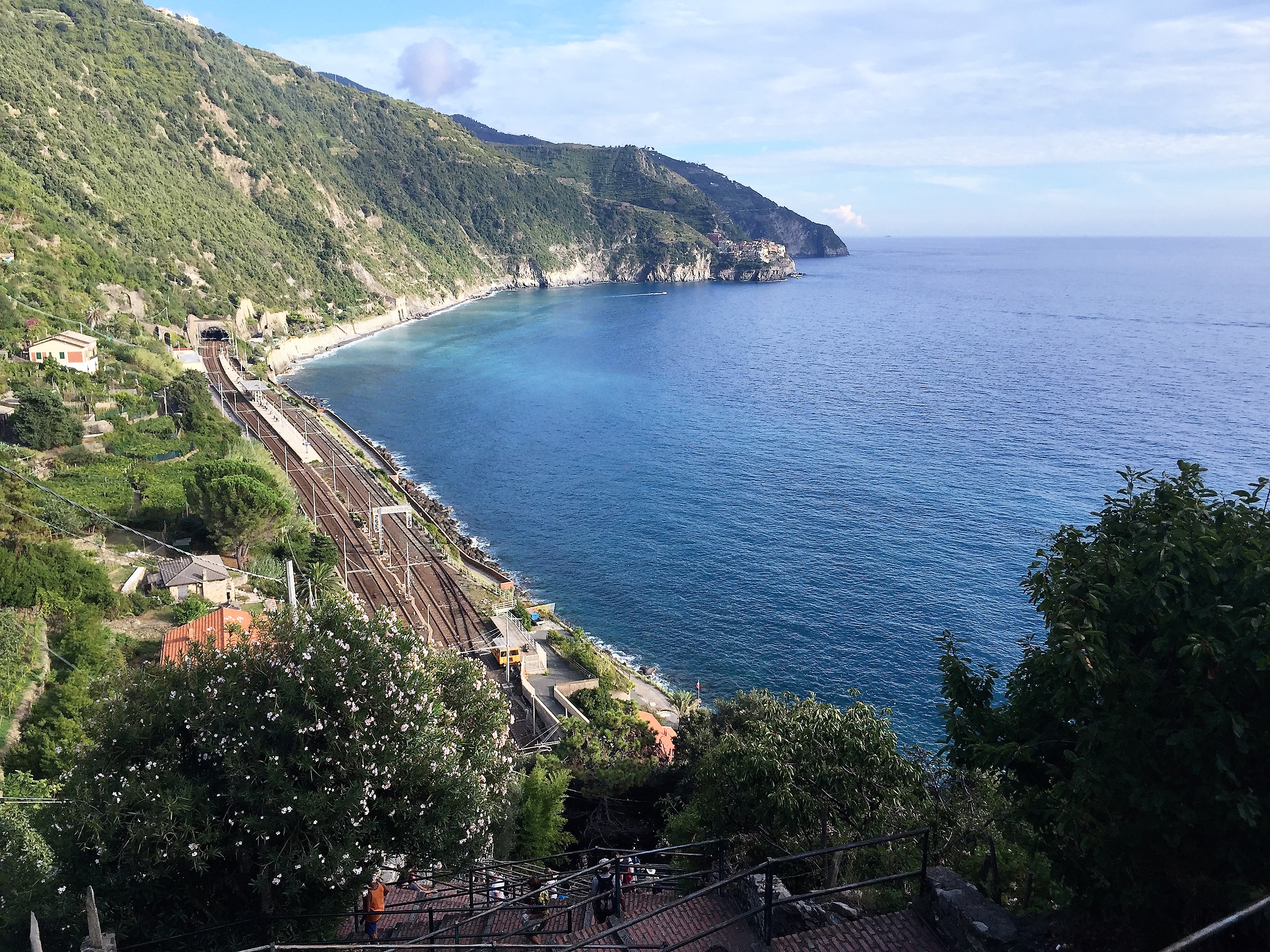 Like the other Cinque Terre villages, Corniglia is characterised by burst of colour, with the characteristic tower-houses (Case-Torri) painted in bright shades of yellow, pink and peach. Corniglia sits on its rocky perch with fantastic views of the surrounding hills and the sea below.

What to See & Do in Corniglia: