1. An introduction to this wonderful city

There is nowhere quite like Barcelona for its sheer style, handsome looks and pulsating energy.   Catalans are truly proud of this engaging city which is perpetually re-inventing itself.   Barcelona’s architecture is outstanding, however, this in itself is not good enough for the Catalans.  Catalans like to showcase the city across every possible dimension and have created a world-class city that has everything.   From its designer shopping, pulsating night scene through to its world-class cultural and arts scene and this is before you start on its fantastic climate and world-class football team.  Barcelona is a mesmerising city both day and night, one of the great places on Earth. 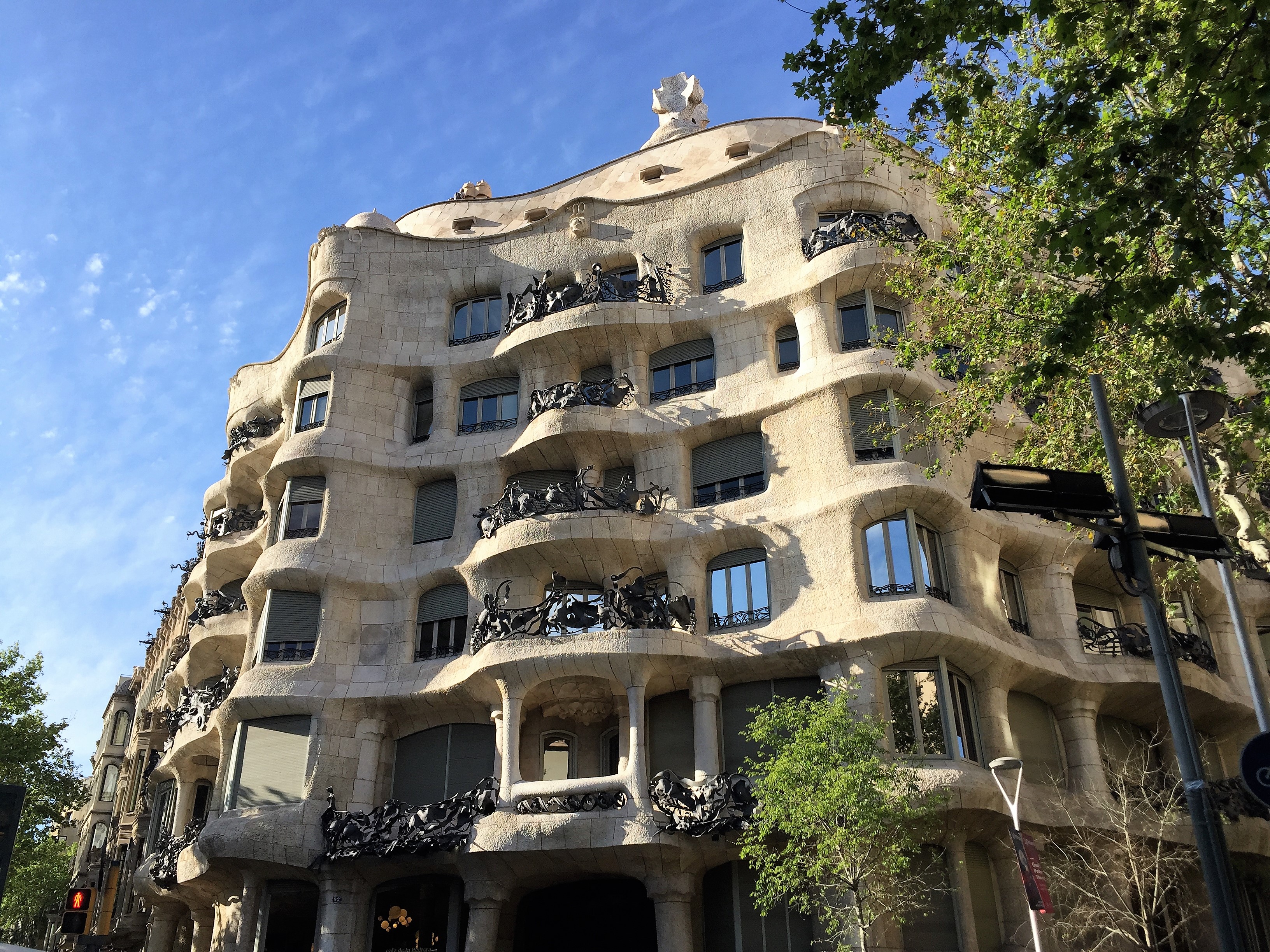 Barcelona as a city and the wonderful Catalans truly embrace life and like to showcase their incredible city – from its fabulous markets, through to strolling down Las Ramblas, playing beach volleyball on Barceloneta Beach through to lazing around eating world-class tapas through to partying in Barcelona’s frenetic Festivals.  They are also incredibly proud (and who wouldn’t be) of their world-class football team. 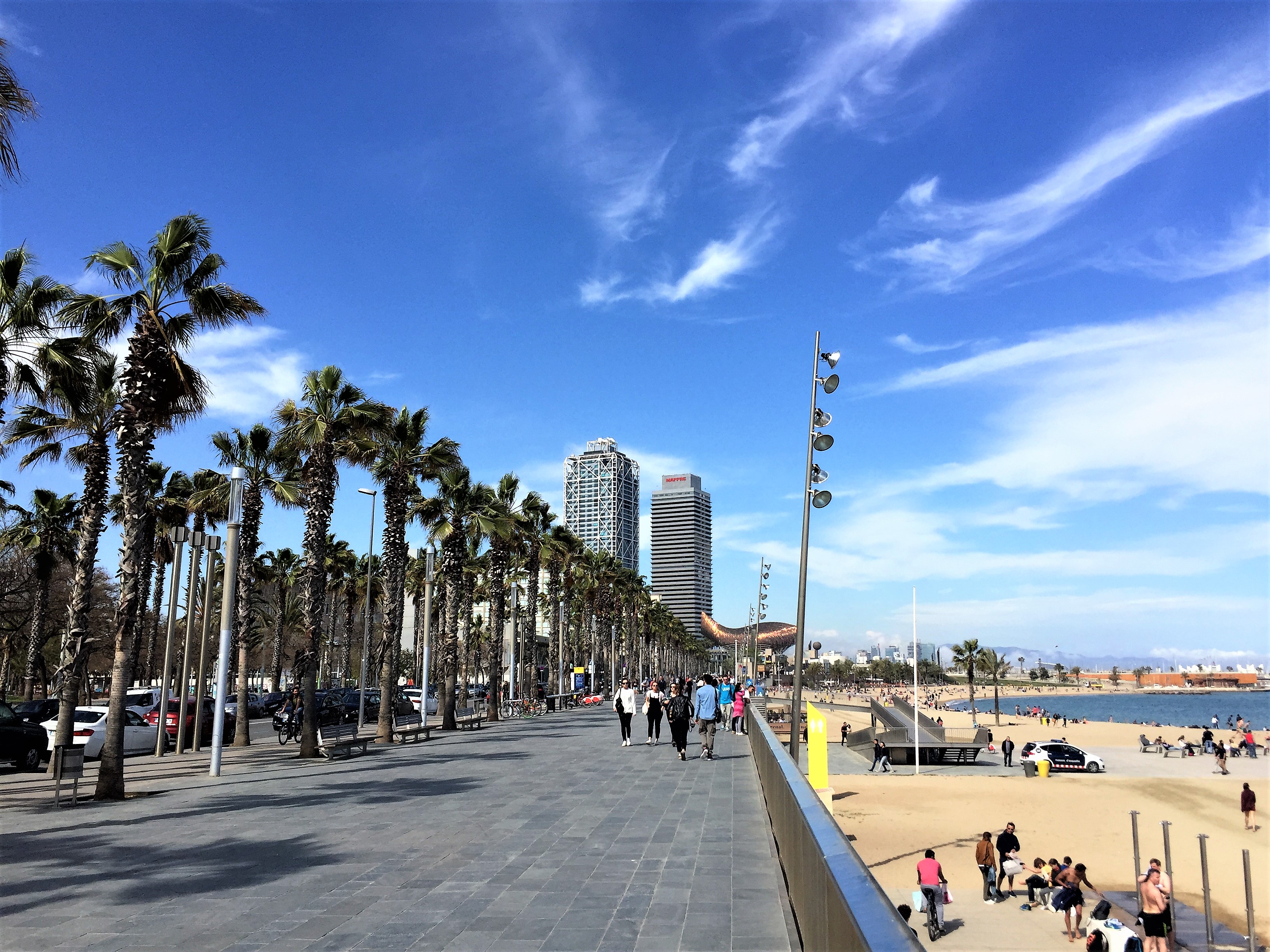 The second-largest city in Spain and capital of Catalonia, Barcelona is situated on the Mediterranean coast and makes a vibrant and exciting place to visit.   The Barri Gotic (Gothic Quarter in Catalan) is the splendid medieval centre of the old city of Barcelona, including the well-known Las Ramblas. 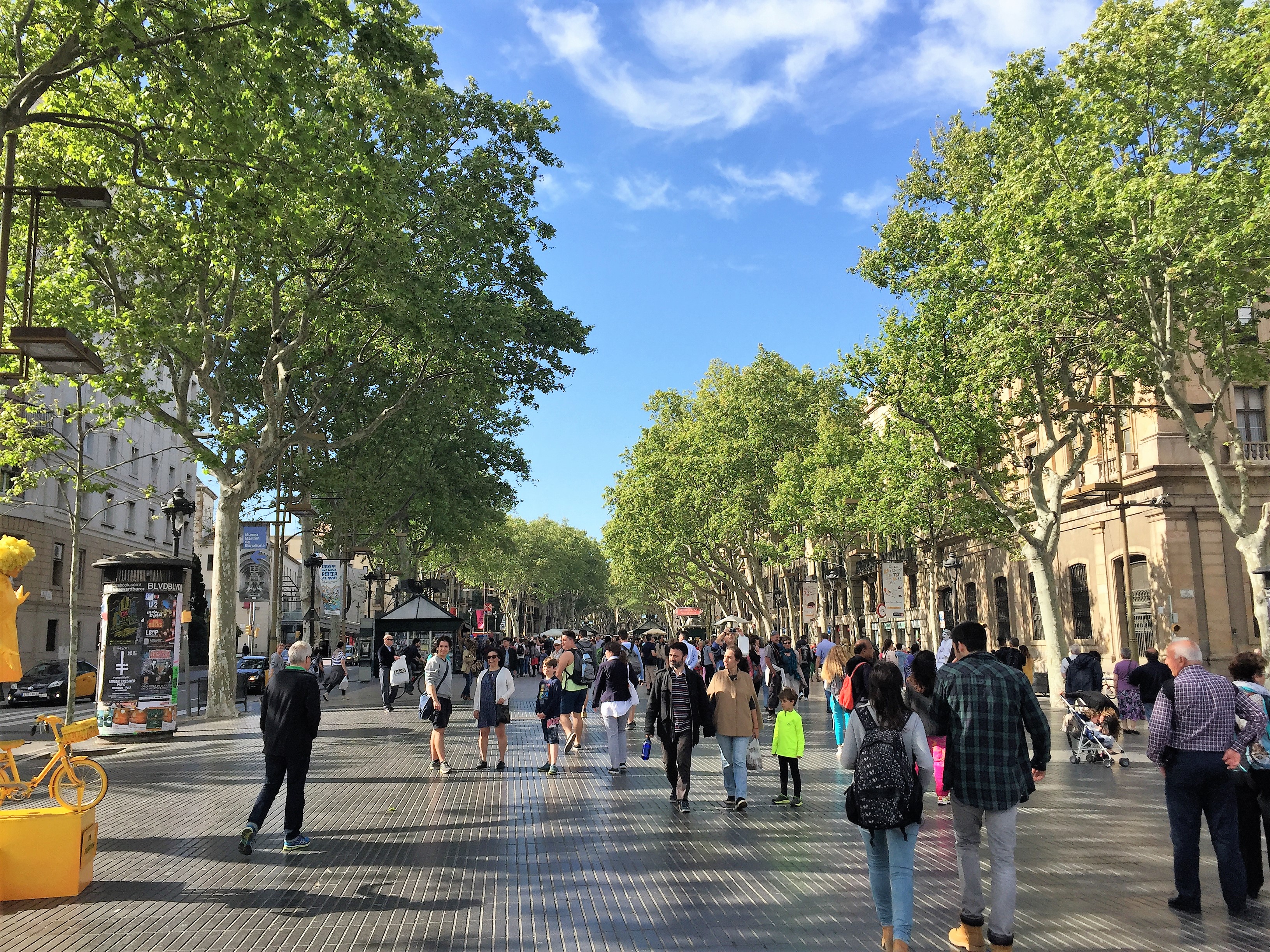 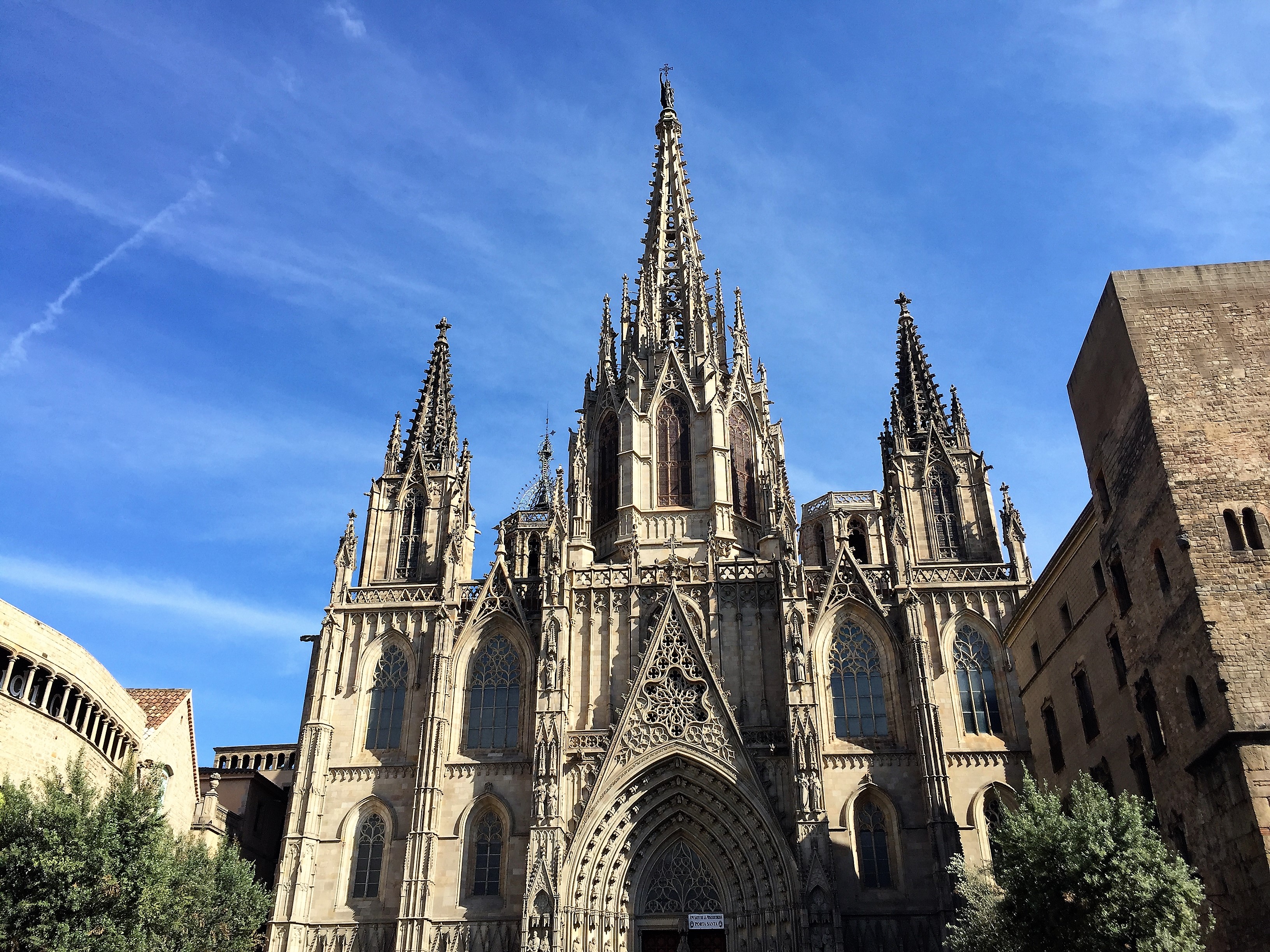 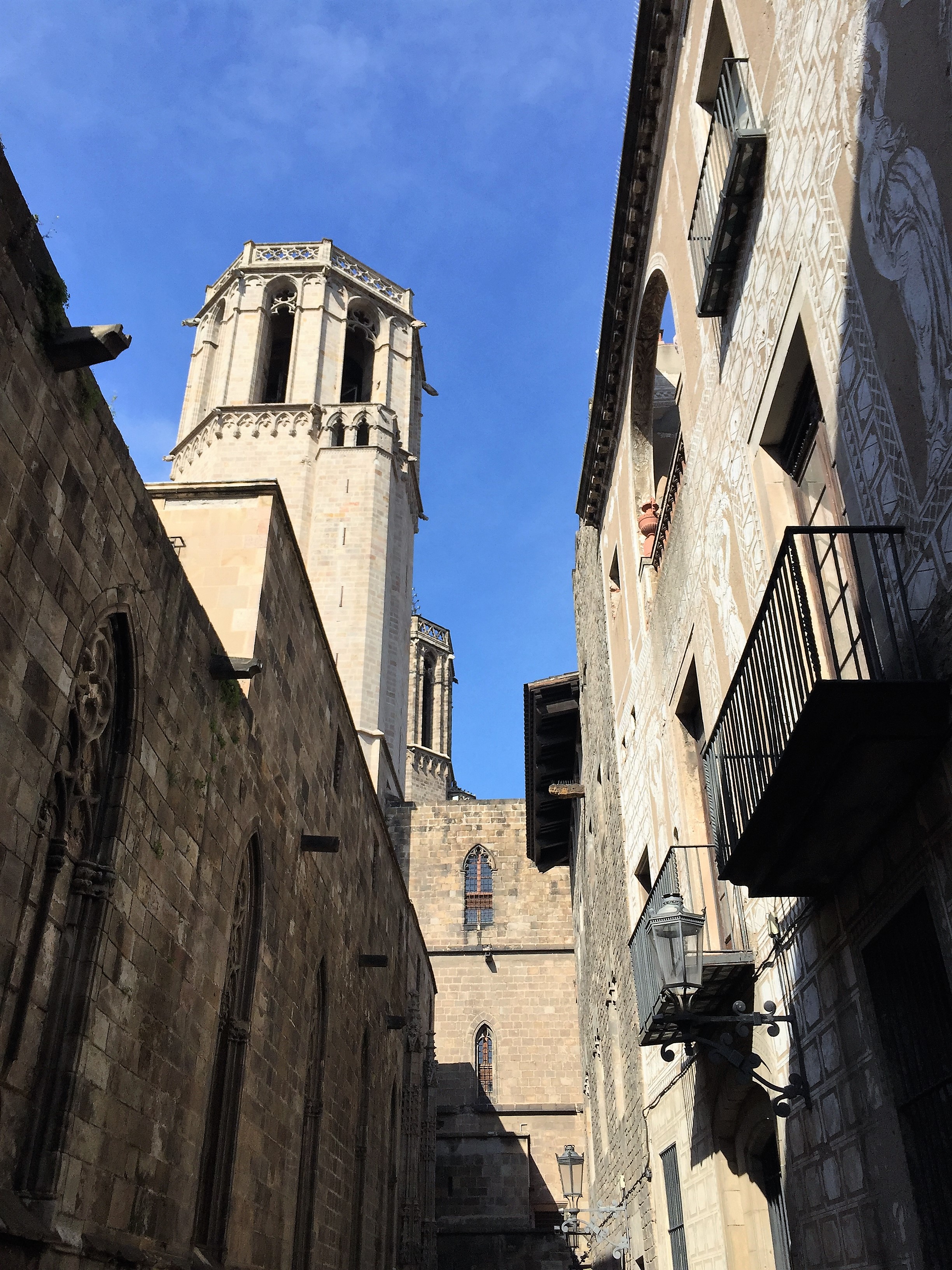 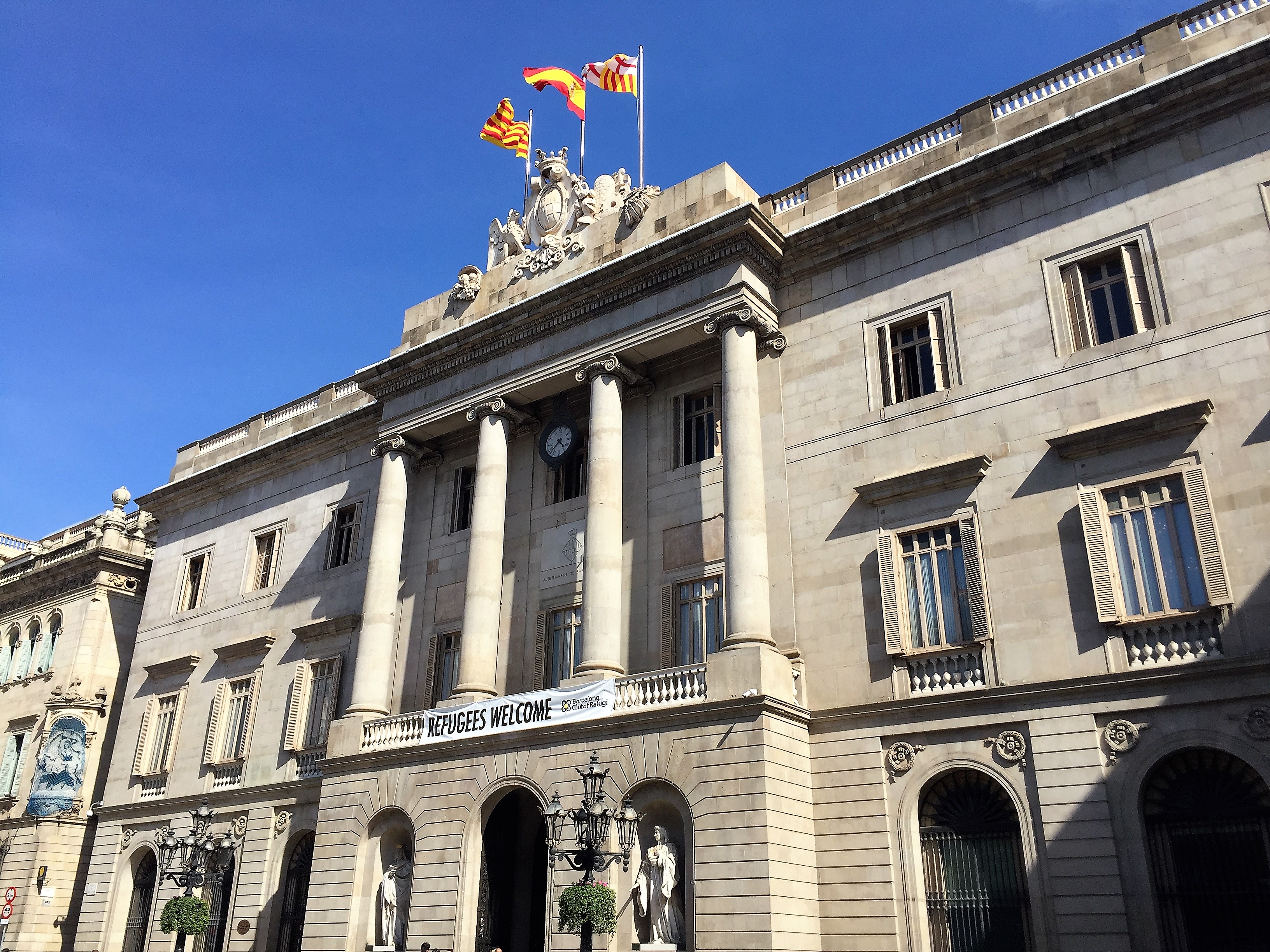 Gaudi did not start or finish the building for which he is probably most famous – La Sagrada Familia.   Having replaced another architect in 1884, he became obsessed by the project, planning three superbly ornate facades devoted to the Nativity, Passion and Glory, each to be crowned by four towers. 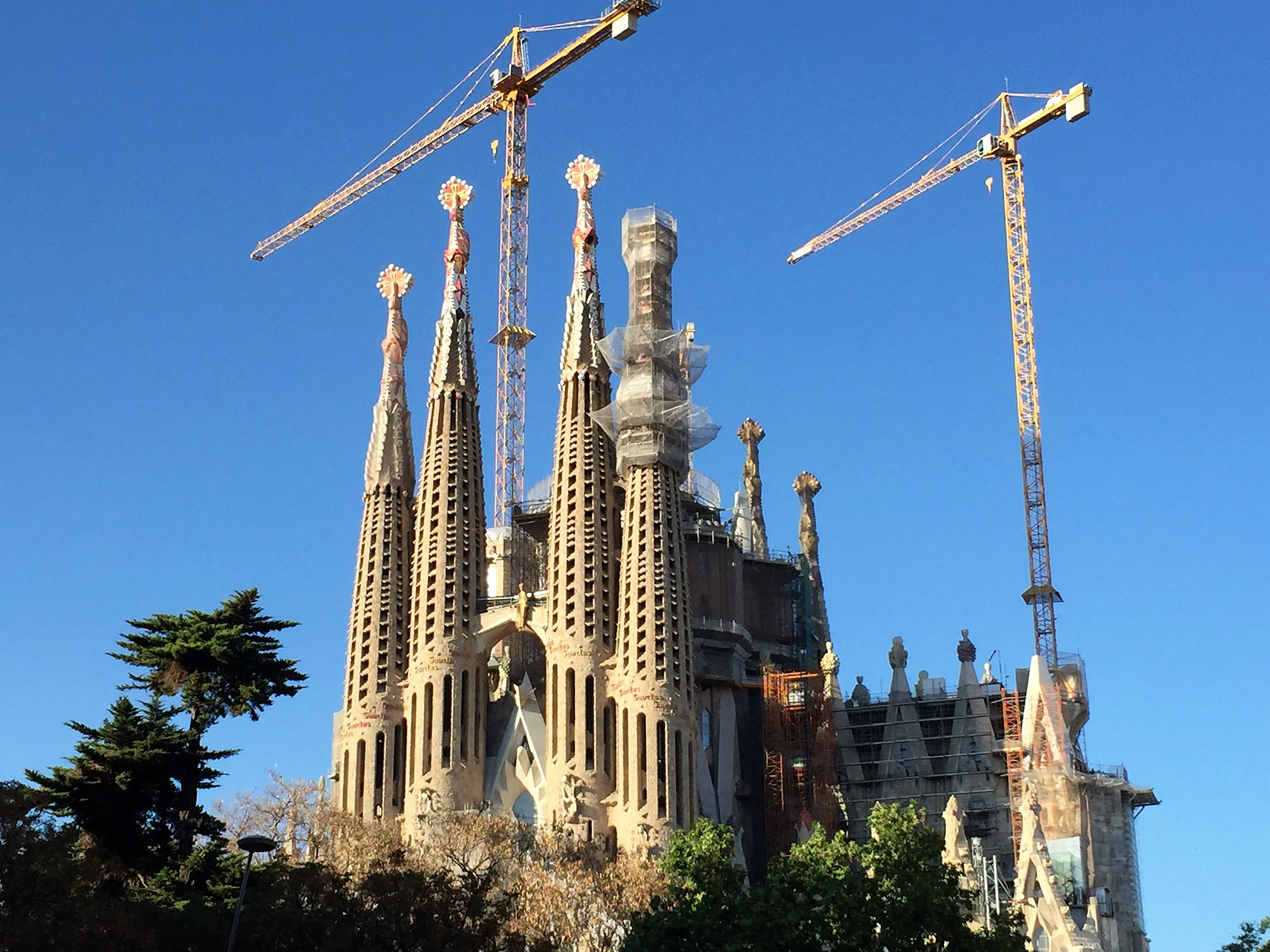 The design was so complicated that he only saw the creation of the Nativity.  When asked why he was fussing about the top of the tower Gaudi replied, “the angels will see them”.  When funds ran out, he sold all his possessions and started sleeping on the site.   In 1926 he was tragically hit by a tram and died.   In 1952 work restarted and the still unfinished architectural masterpiece is visited by millions every year.

The year 2026 will mark the centenary year of the death of Gaudí and the goal is to celebrate Gaudí’s anniversary by completing the Sagrada Familia.  I for one will certainly be booking my flights and accommodation for what will be a truly magical event.

Barcelona has a number of visitor attractions within walking distance of each other and in the city centre e.g. Las Ramblas, Barri Gotic, Barceloneta Beach and La Temple Sagrada Familia.  Barcelona also has an excellent Metro system as well as a great hop-on-hop-off Bus network (one of the original) which link those sights that are further a field e.g. Park Guell.

10am – Wander around Barri Gotic:

Barcelona’s preserved medieval centre is the Barri Gotic, a warren of streets where it is easy to get lost. The focal point is the Cathedral. Next to it is the Palau Reial (Royal Place), part of which is now the Museu d’Historia de la Ciutat, where you can take a fascinating subterranean stroll over the evacuated ruins of Roman Barcelona. The palace houses the fascinating Museu Frederic Mares. There are plenty of places for a budget lunch in this area.

After lunch visit the wonderful Palau de la Musica Catalana and its dazzling Modernista interior.   Then browse around the trendy shops in the El Born district.

Then if you’re an art lover top off your afternoon with a visit to the Museu Picasso. houses one of the most extensive collections of artworks by the 20th-century Spanish artist Pablo Picasso. With 4,251 works exhibited by the painter, the museum has one of the most complete permanent collections of works.  Wander down the lively tree-lined La Rambla. La Rambla stretches for 1.2 km connecting Plaça de Catalunya in the centre with the Christopher Columbus Monument at Port Vell. 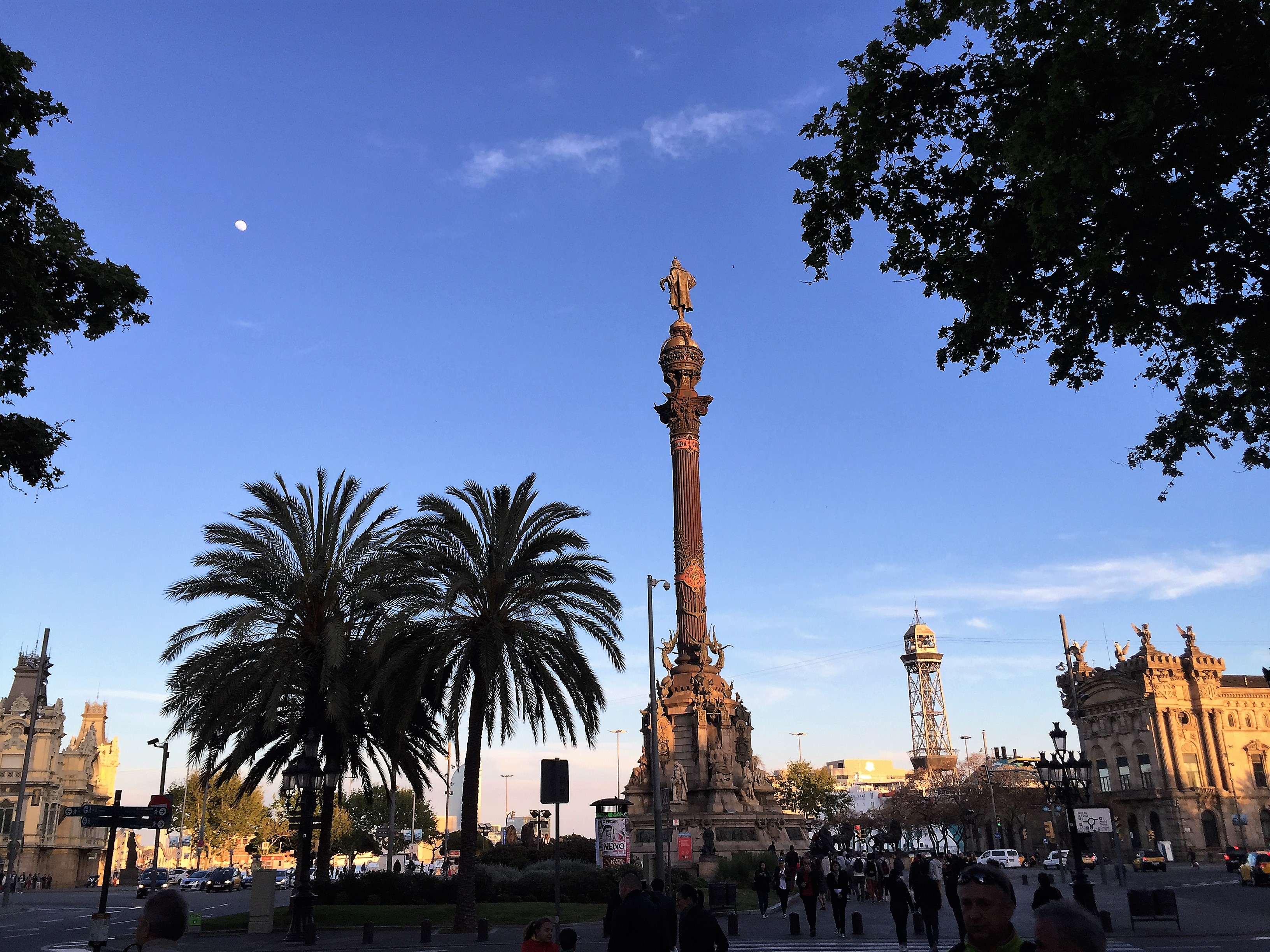 Chef Paco Pérez has earned two Michelin stars (2010 and 2013) for his Enoteca. No longer is it just another restaurant in the Hotel Arts, but a heavyweight in Barcelona in its own right. Pérez can also be proud of the two stars he’s earned for his Miramar restaurant in the Catalan city of Llançà. Few chefs can translate the flavour of the sea into haute cuisine the way he does, and his craft speaks to the imagination.

Spain’s biggest tourist attraction is a unique, extraordinary piece of architecture. Conceived as a template as atonement for Barcelona’s sins of modernity, this giant church became Gaudi’s holy mission.  A work in progress for more than a century, when completed it will have capacity for 13,000 faithful.   Allow plenty of time to make sense of the detail on the two facades of this extraordinary church – the Passion façade and the Nativity façade – and also explore the vertigo inducing fantasy towers.

Completed in 1914 with a Modernism influenced design, this is one Barcelona landmark where the architecture is overshadowed by what lies within – the freshest produce from around Spain.

One of the Passeig de Gracia’s and indeed Barcelona’s, most beautiful Modernista structures – officially called Casa Mila after its owners but nicknamed La Pedrera (The Stone Quarry) by bemused locals who watched Gaudi build it from 1905 to 1910.  Conceived as an apartment block, its approach to space and light and its blurring of the dividing line between decoration and functionality will leave you gasping as the sheer originality of it all.

From the playful genius of its façade to its revolutionary experiments in light and architectural form (straight lines are few and far between) and make your way up to the roof terrace to see the remarkable chimneys and “dragon’s back”  Casa Batllo which was built as an anything-but-humble apartment block, is one of the most beautiful buildings in this city were competition for such a title is fierce.   Highlights include the façade, terrace and roof. 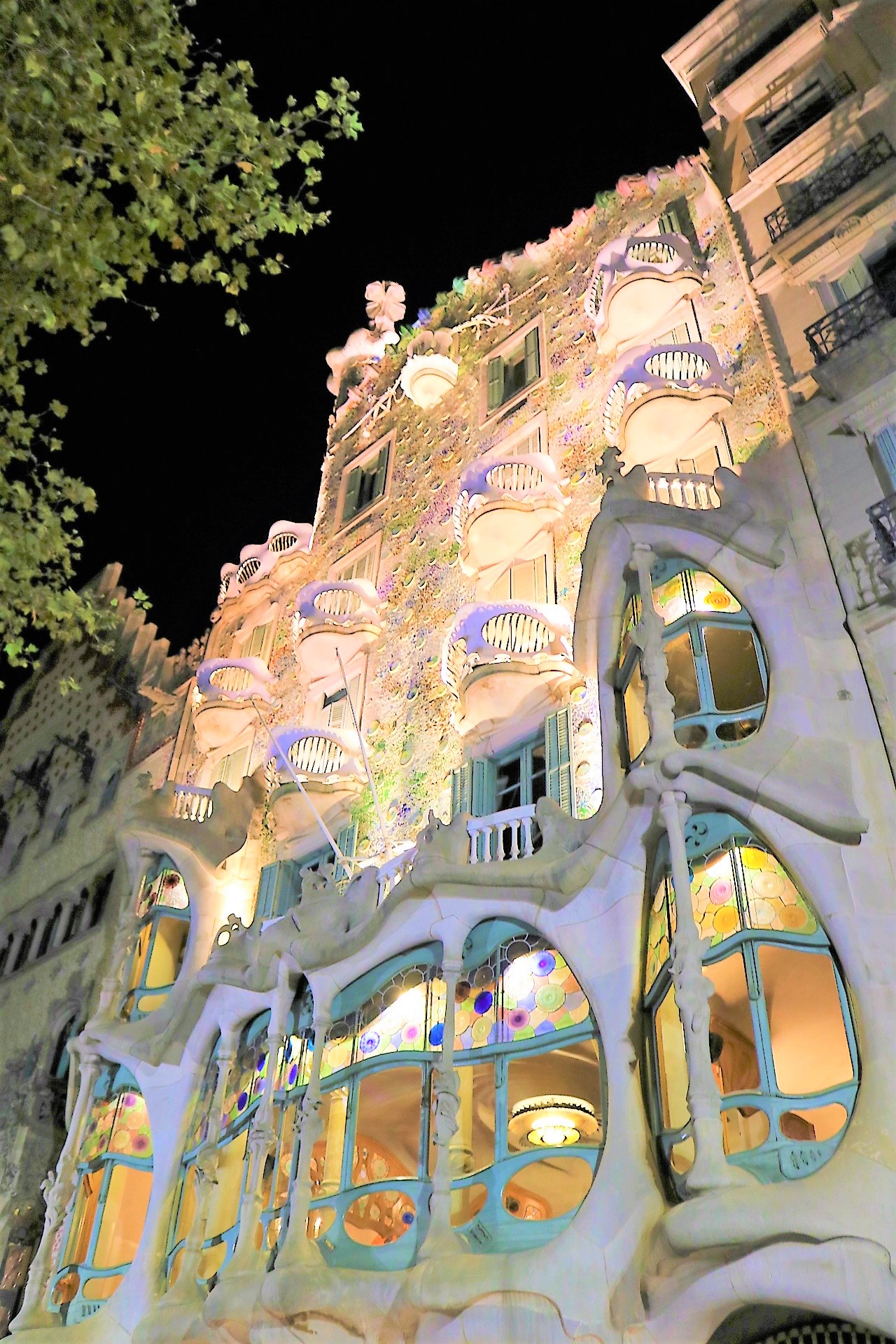 10am – Stroll around Park Guell:

One of Antoni Gaudi’s best-loved creations, Park Guell has been designated a World Heritage Site by UNESCO – a fantasy public park that was designed as a gated playground for Barcelona’s rich – climbs a hillside north of the city centre.

This is where the master architect turned his hand to landscape gardening and the result is an expansive and playful stand of greenery interspersed without otherworldly structures glittering with ceramic tiles. 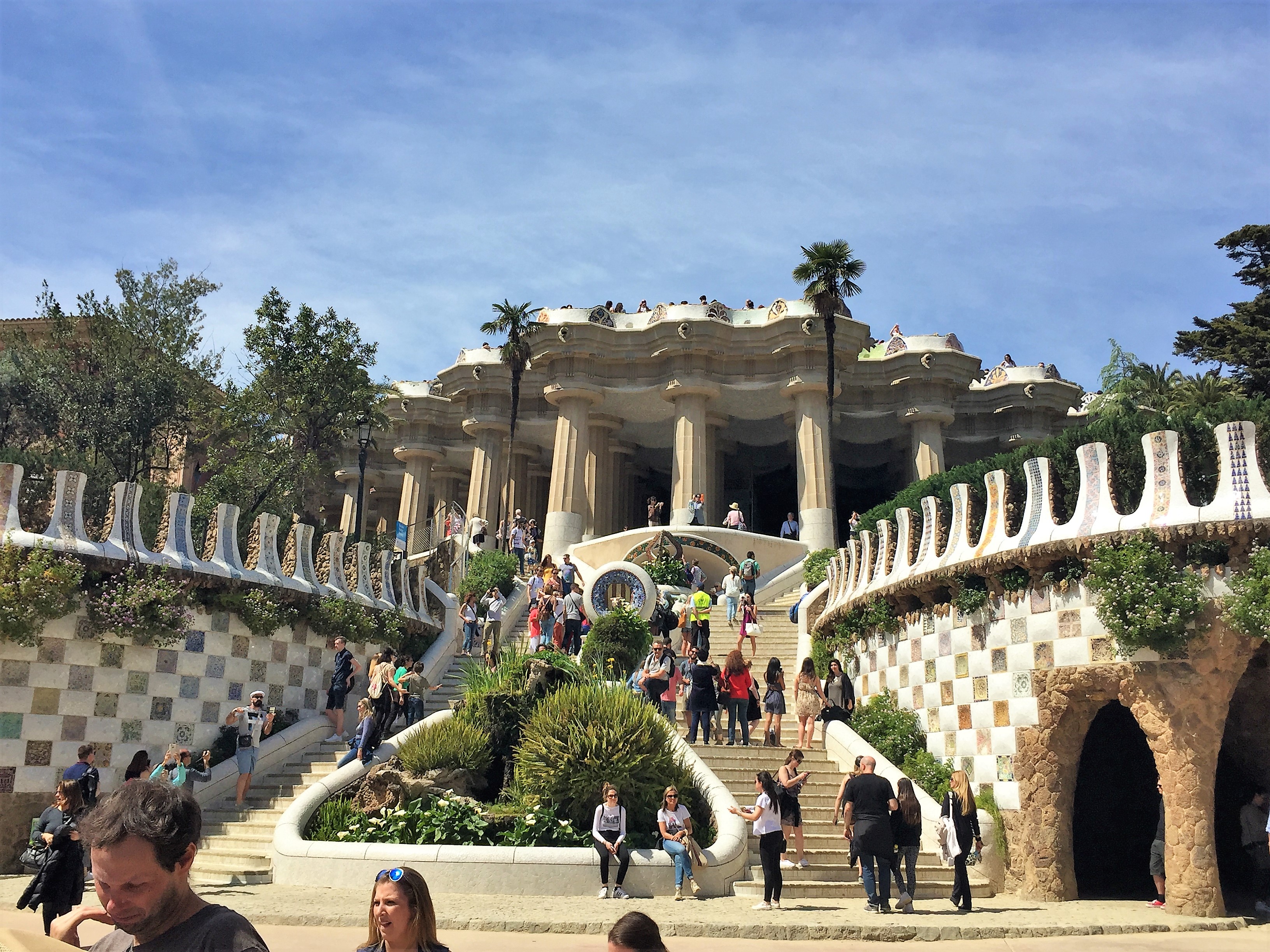 2pm – An afternoon cooling of at the Beach:

Join the locals and head to the seaside neighborhood of La Barceloneta to surf and sunbathe on Sant Sebastià Beach, and to dine out at al fresco seafood restaurants and traditional tapas bars.

Posh yachts fill glitzy marinas like the Port Olímpic complex, which is connected to the beach by a long, palm-lined promenade. The Port Cable Car offers panoramic city views on its way to Montjuïc Hill.

Evening – A magical evening on Montjuïc:

Montjuïc is the hilltop that overlooks the city and sea. For a fun night out, take the Teleferic cable car to 17th century Castell de Montjuïc for sweeping views, before heading to the beautiful La Font Magica sound and light show.

Follow-up with drinks and dancing in the fabulous open-air nightspot in Poble Espanyol – an intriguing dream-like landscape of Spanish architecture built for the 1929 World Exhibition. 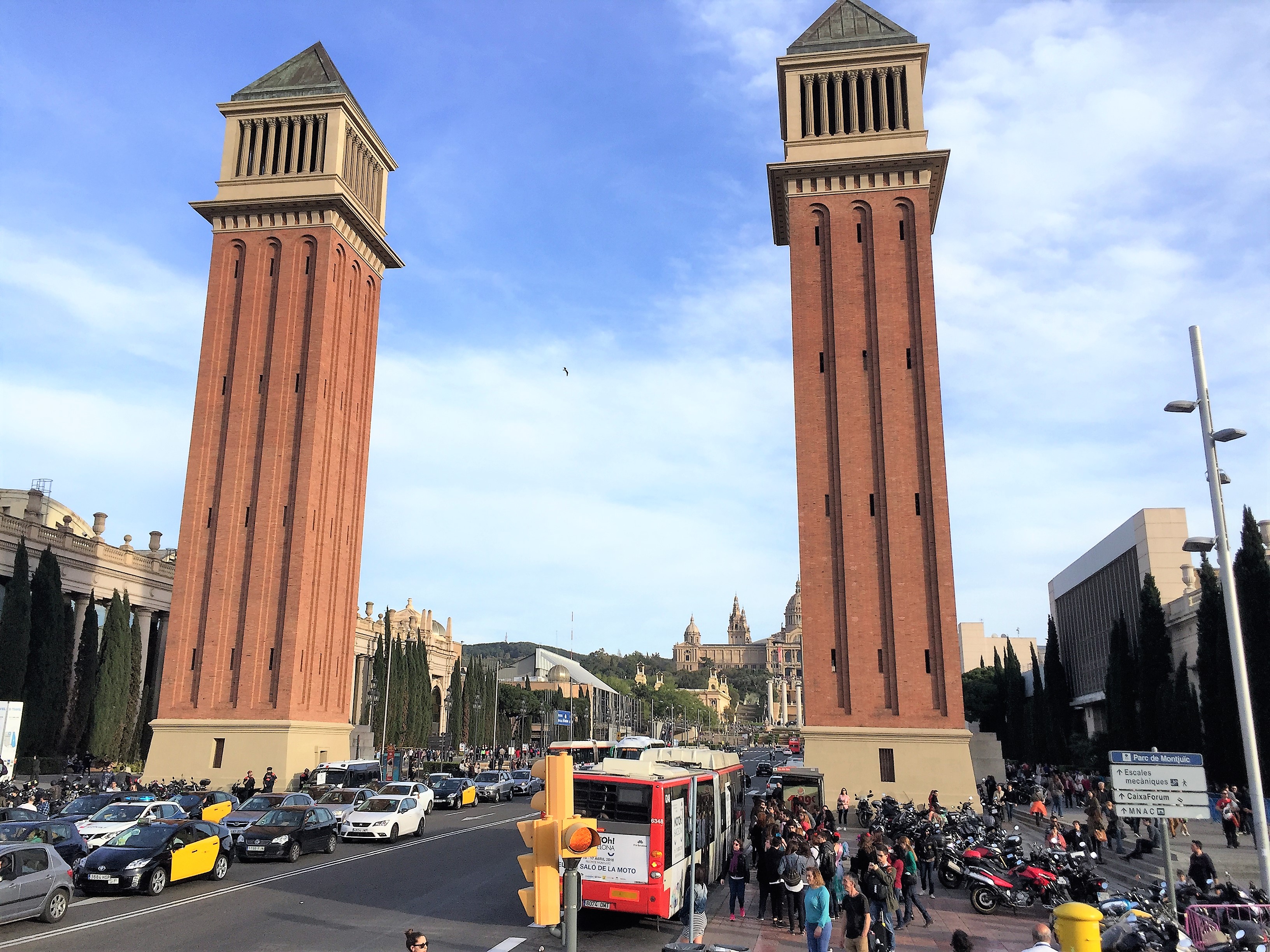 10am – Thrills and views from the Tibidabo amusement park:

A trip to the city’s highest peak is an old-style family outing bursting with nostalgia.   The panoramic vistas across Barcelona are fabulous and then you have the retro rides which offer great fun.

One of the best parts of the experience is travelling to the amusement park which includes taking an old tram that rattles along an avenue lined with Modernista mansions; then hopping aboard a funicular for a speedy ascent to the top. 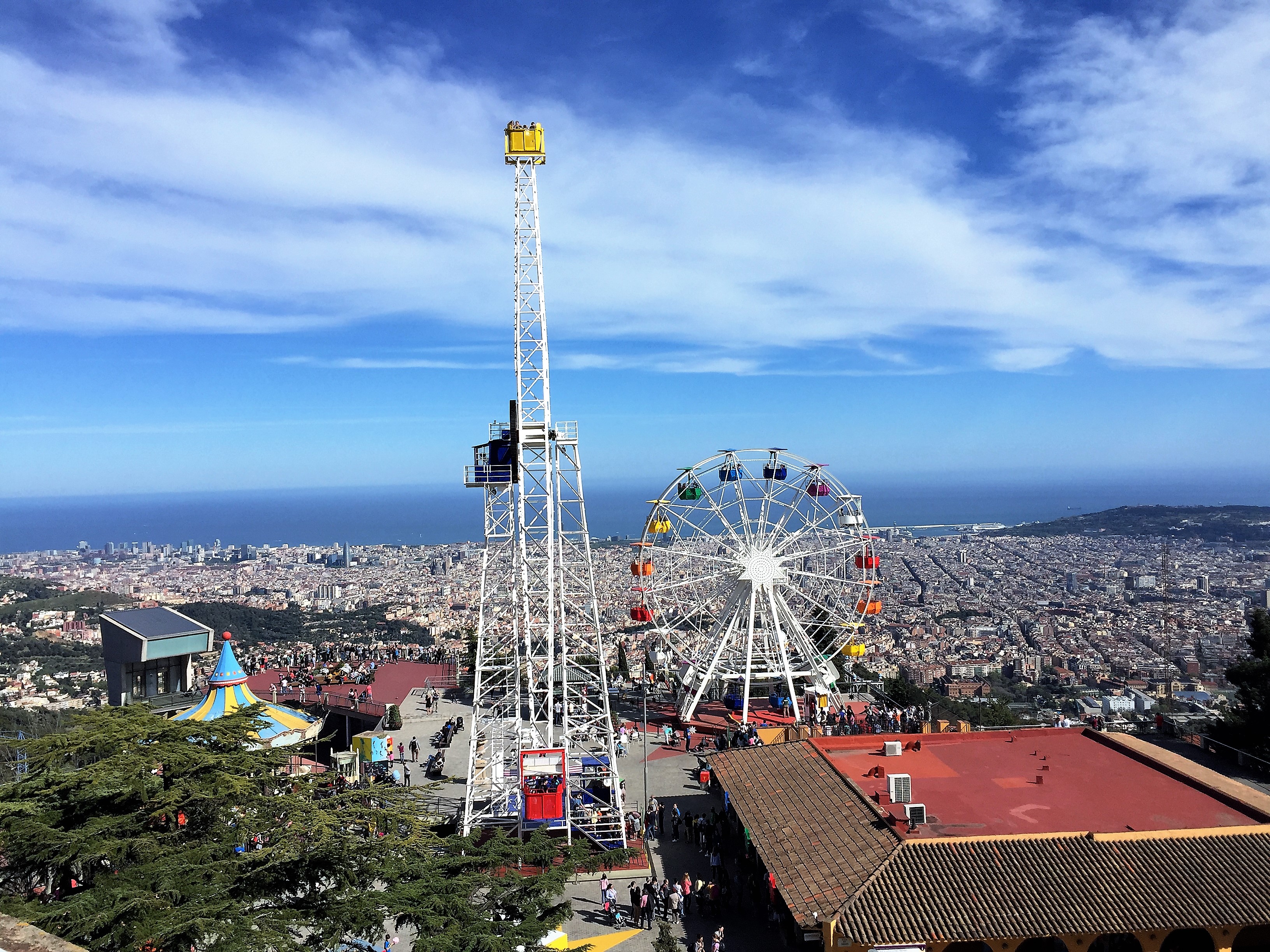 Noon – Eat with a view at the fabulous Mirablau restaurant:

Gaze out over Barcelona from the terrace at the Mirablau restaurant which sits just below Tibidabo amusement park.

The handsomely landscaped Parc de la Ciutadella is a local favourite for a leisurely walk.   The park is the site of Catalonia’s regional parliament, the city zoo and some eye-catching buildings.

The monumental waterfall created between 1875 and 1881 by Josep Fontsere with the help of a young Antoni Gaudi is a dramatic combination of rocks, greenery and thundering water. 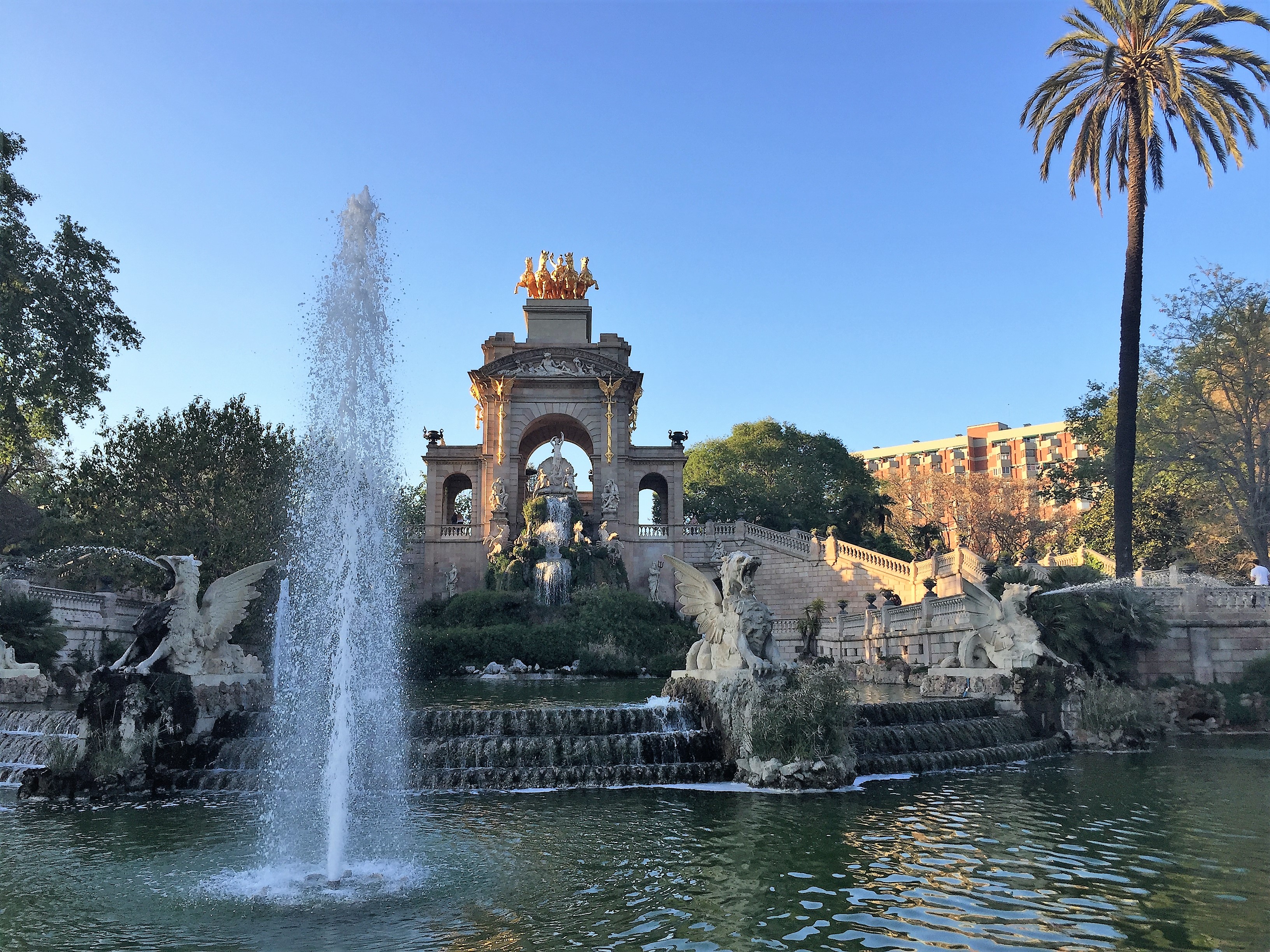 Elisabets is an tapas institution in the Barcelona’s Raval district for its generous portions and homemade cuisine at great value.

Both locals and tourists having been filling Elisabets since it was founded in 1962.

It is decorated with fabulously nostalgic furniture e.g. marble tables, wooden chairs, old photographs and antique radios. Let your hair down with a few drinks and listen to the fabulous chatter of Catalans