Portovenere is a medieval fishing village situated in north Italy, just south of the Cinque Terre the Italian Riviera much loved by Lord George Gordon Byron.  Portovenere is often referred to being one stop in the “Bay of Poets,” part of three small villages and islands, declared a UNESCO World Heritage Site in 1997, located in the province of La Spezia. Back in the day, namely the first century BC, it was known as “Portus Veneris”; the town’s name stemming from an ancient temple dedicated to the goddess Venus. 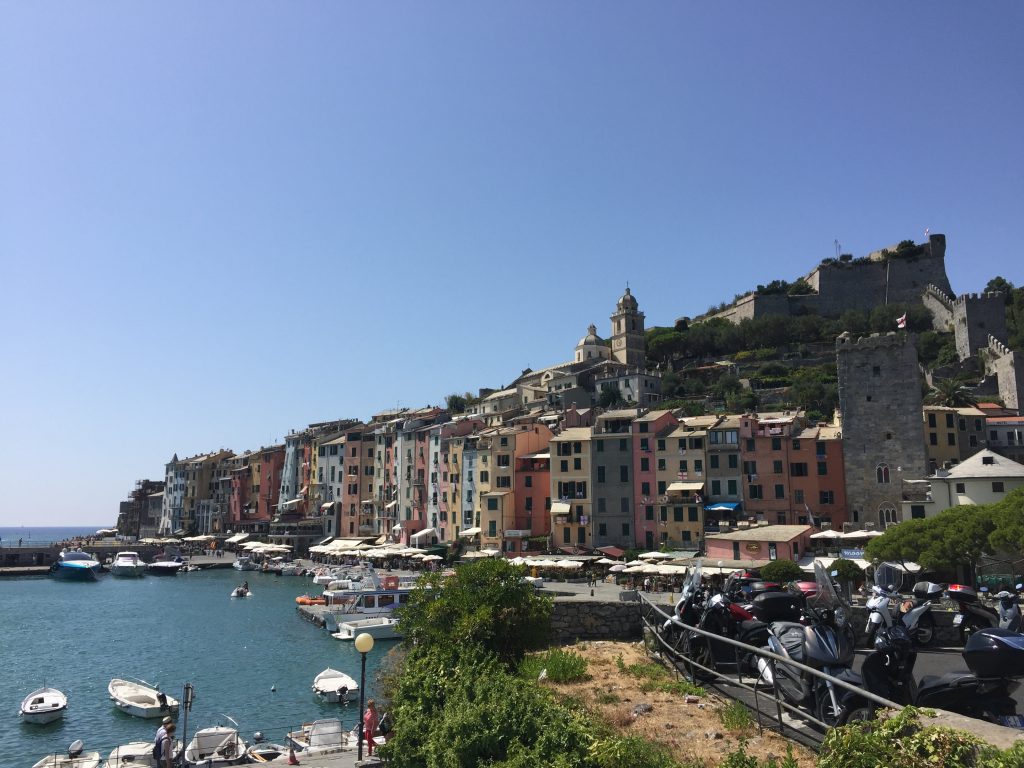 The Portovenere Travel Summary is segmented into 2 key travel themes to immerse you into everything Portovenere:

Portovenere boasts a beautiful castle, picturesque houses and churches, and hidden sea caves.   It also has a charming historic centre with narrow lanes, stepped alleyways and archways. The historic centre has an array of shops, restaurants and trendy bars and cafes to enjoy. 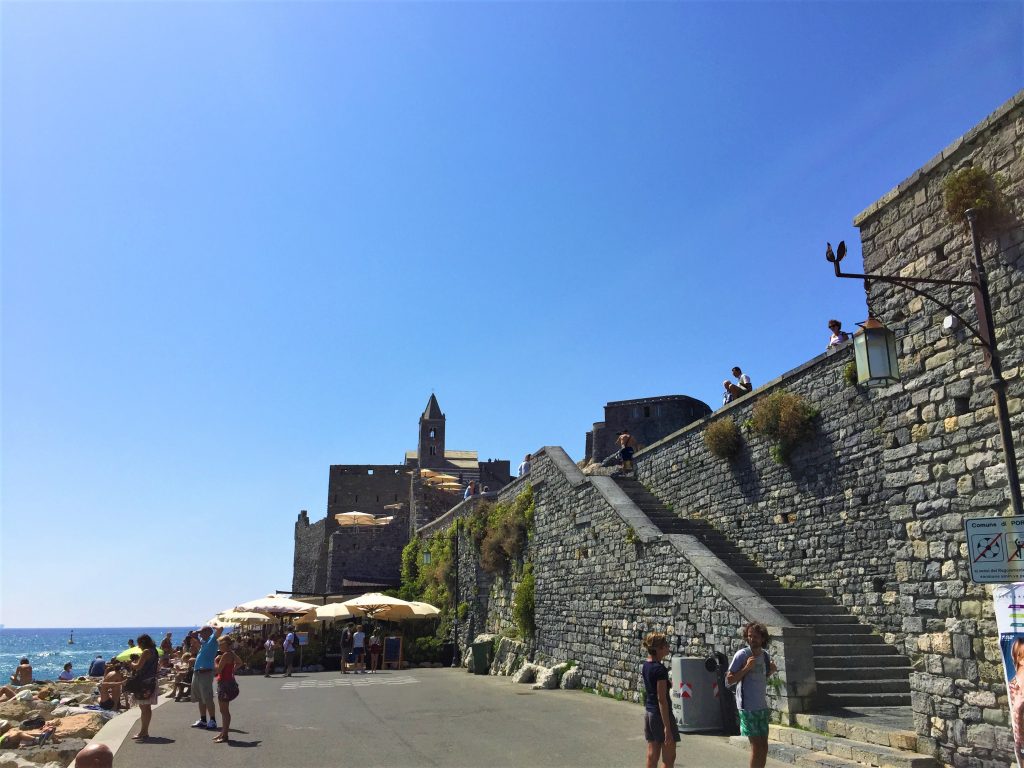 There are so many things to see and photograph: in addition to the Castle, the San Lorenzo church, the San Pietro church and Byron’s cave, you can relax on the beaches or enjoy the sun on the rocks, or go along the caruggio that crosses the old village and contains delightful shops selling Liguirian products and souvenirs. 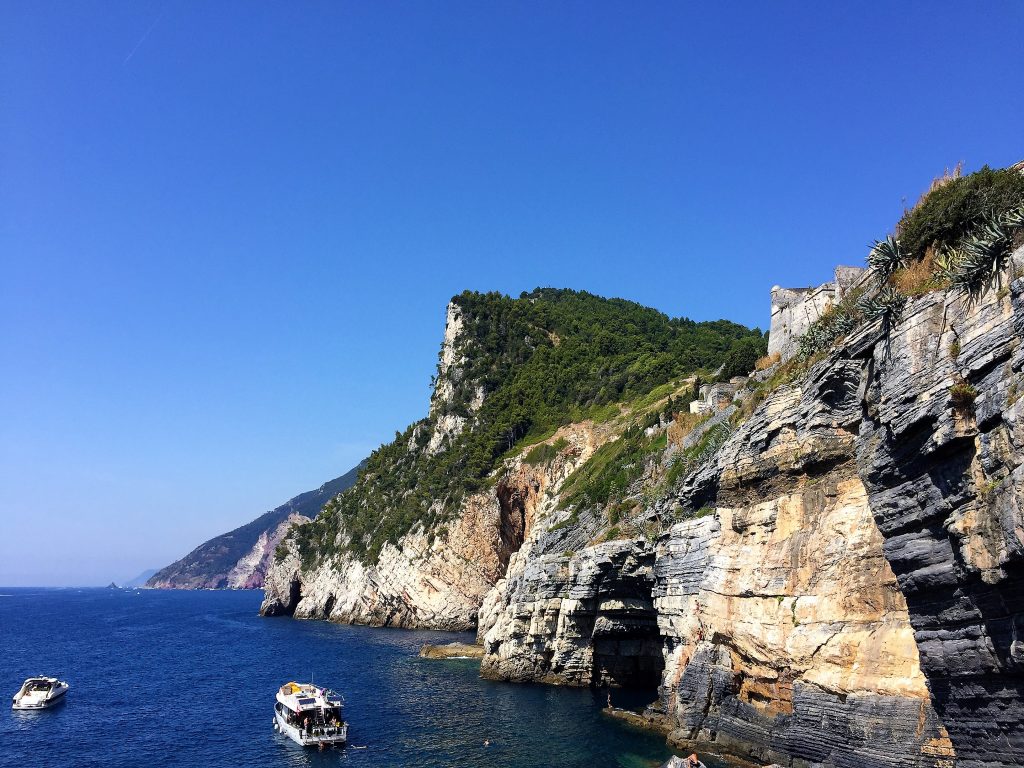 You will reach the beautiful harbour first with colourful fisherman’s boats lining the harbour.  The seafood restaurants that line the harbour a very popular to sample the catch-of-the-day.   From the harbour you can see the beautiful San Pietro church which has as a Gothic bell tower and Romanesque loggia.    The panorama of Porto Venere is dominated by Doria Castle, a majestic fortress built by the Republic of Genoa in 1161 and situated on a rocky outcrop that overlook the town. In the middle of the village stands the Capitulare Tower, situated to the left of the entrance door in Via Capellini; this is the town’s main street, also called the “Carugio”. 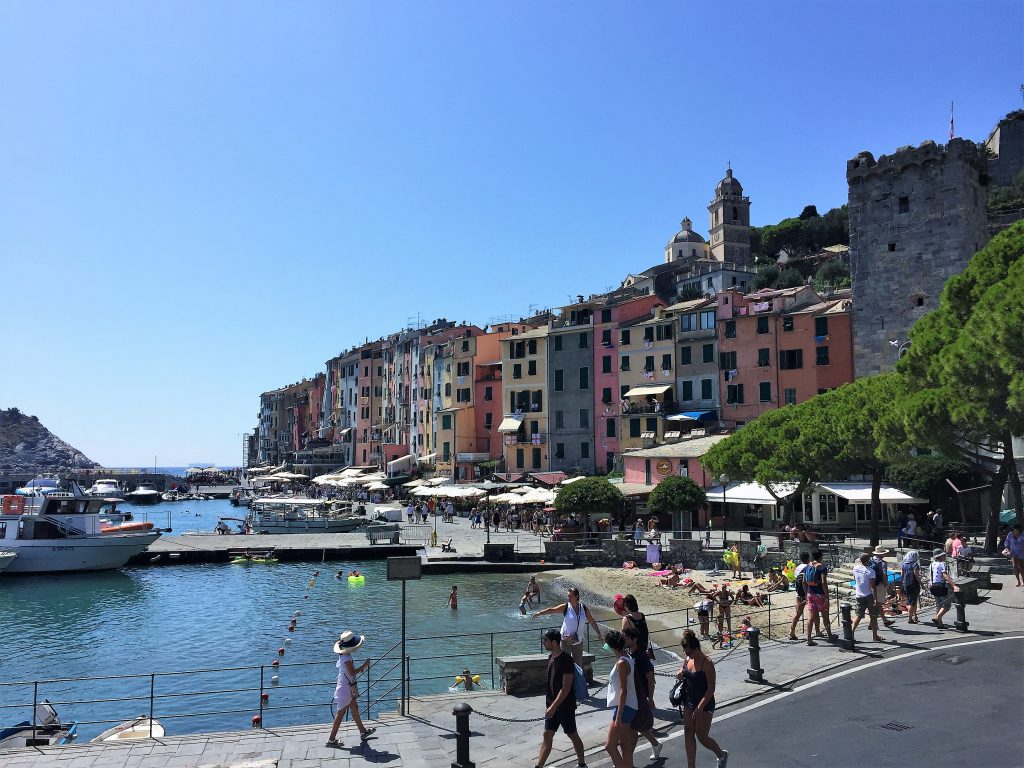 Piazza Spallanzani is a charming square, where once stood the ancient pre-Roman centre of Castrum Vetus. Also worth seeing are the St. Peter’s Church, under which lies the cave of Byron (the most famous one in Porto Venere, together with the Grotta Azzurra), and the Church of San Lorenzo in Collina. 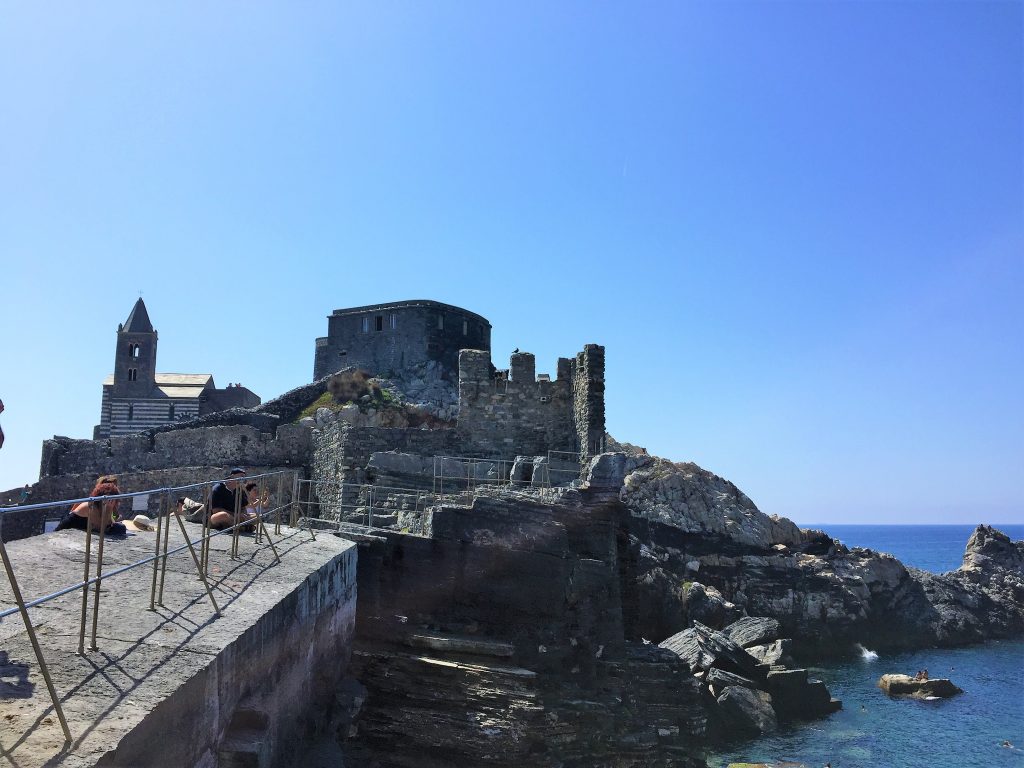 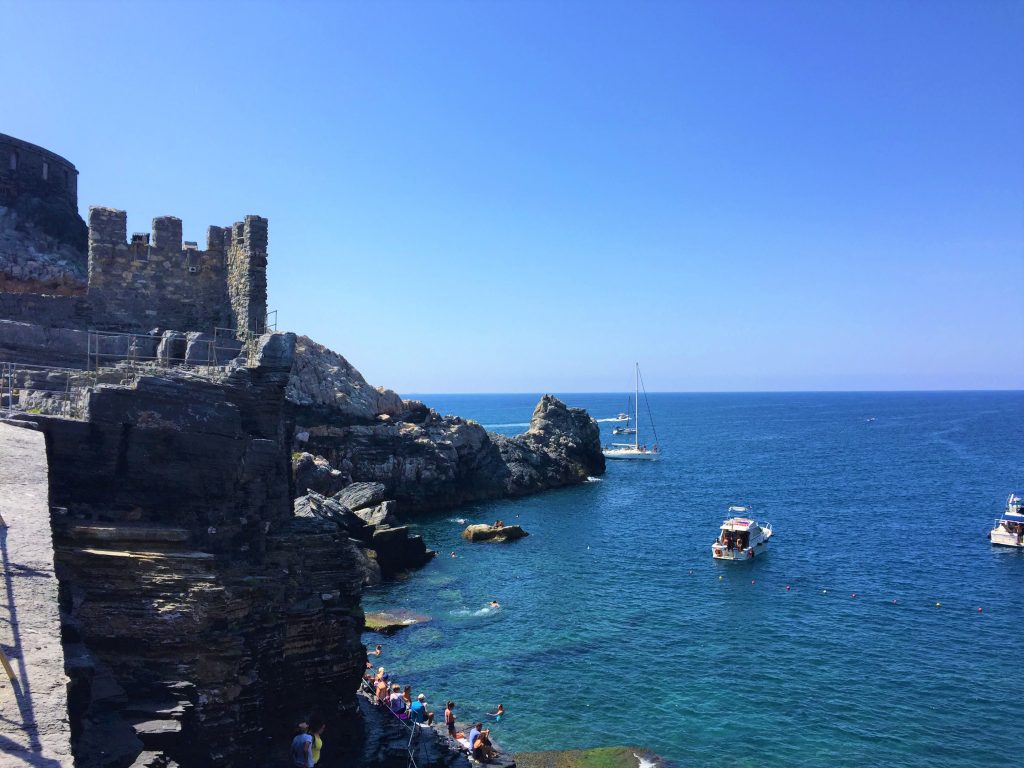 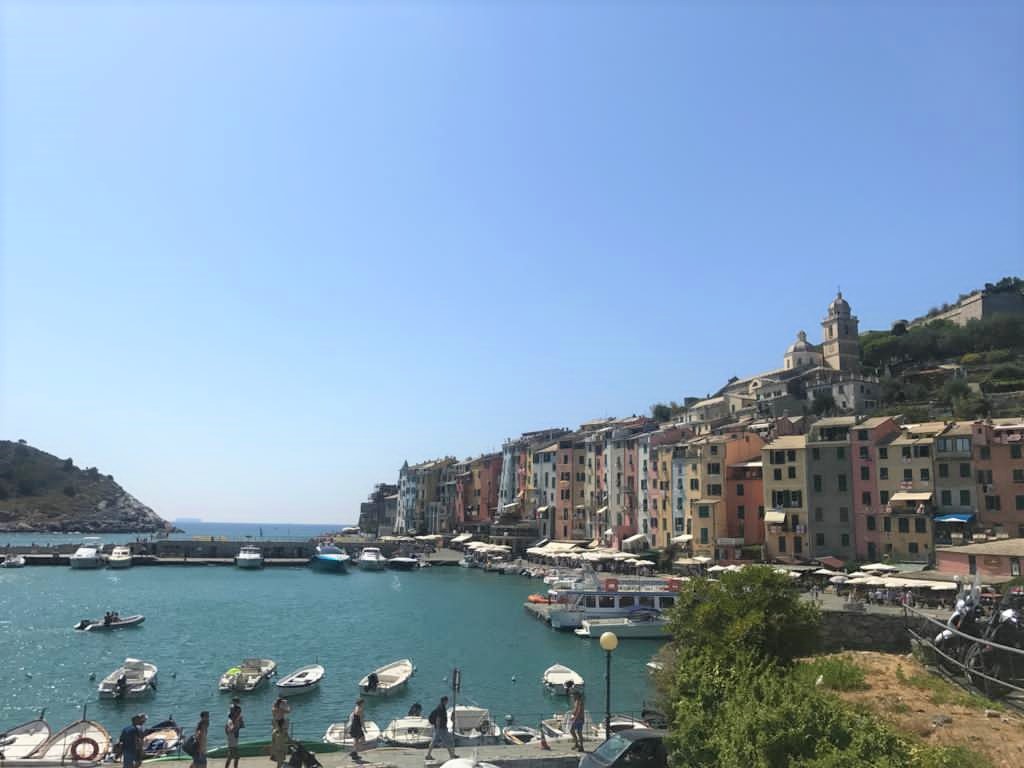 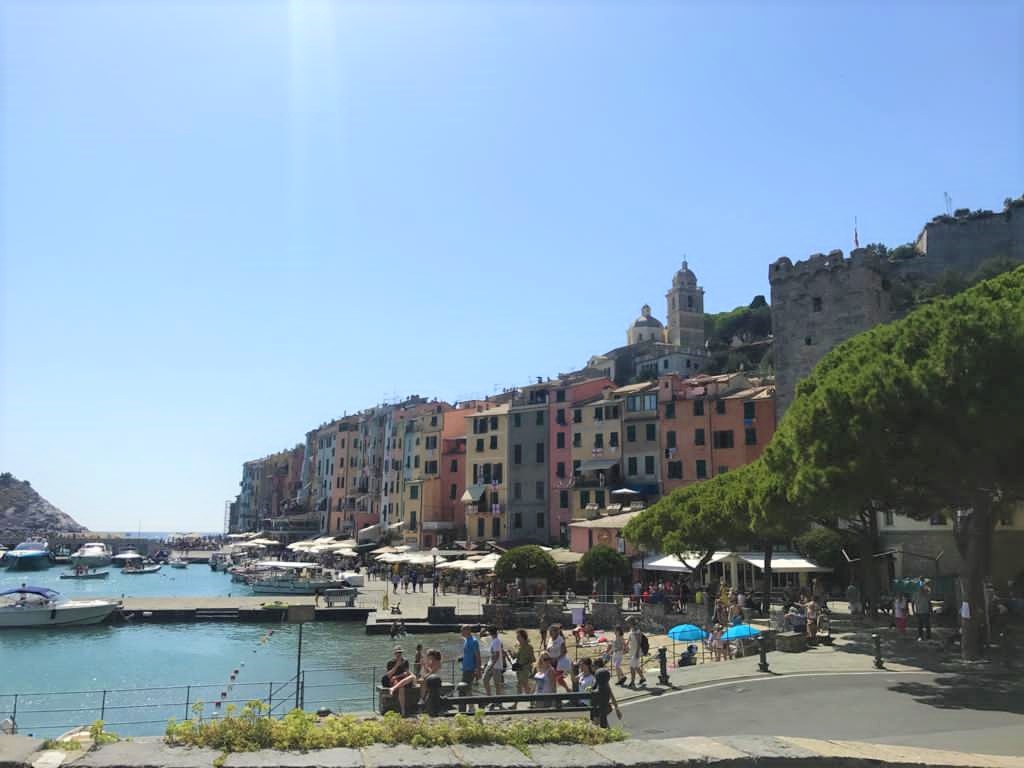 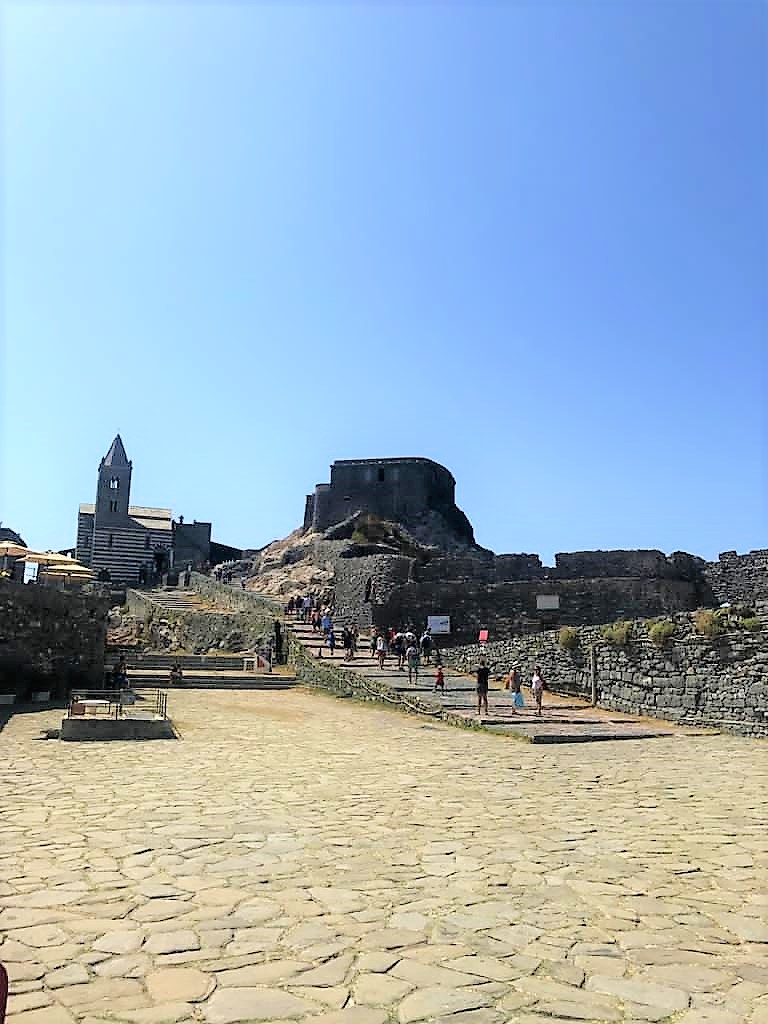 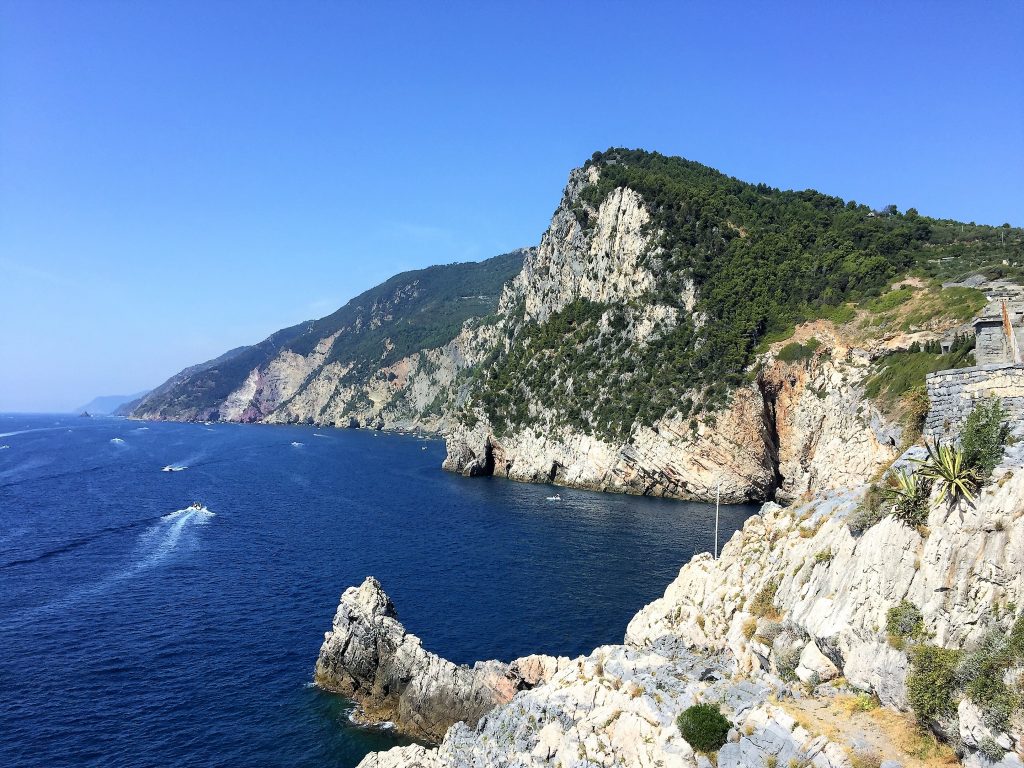 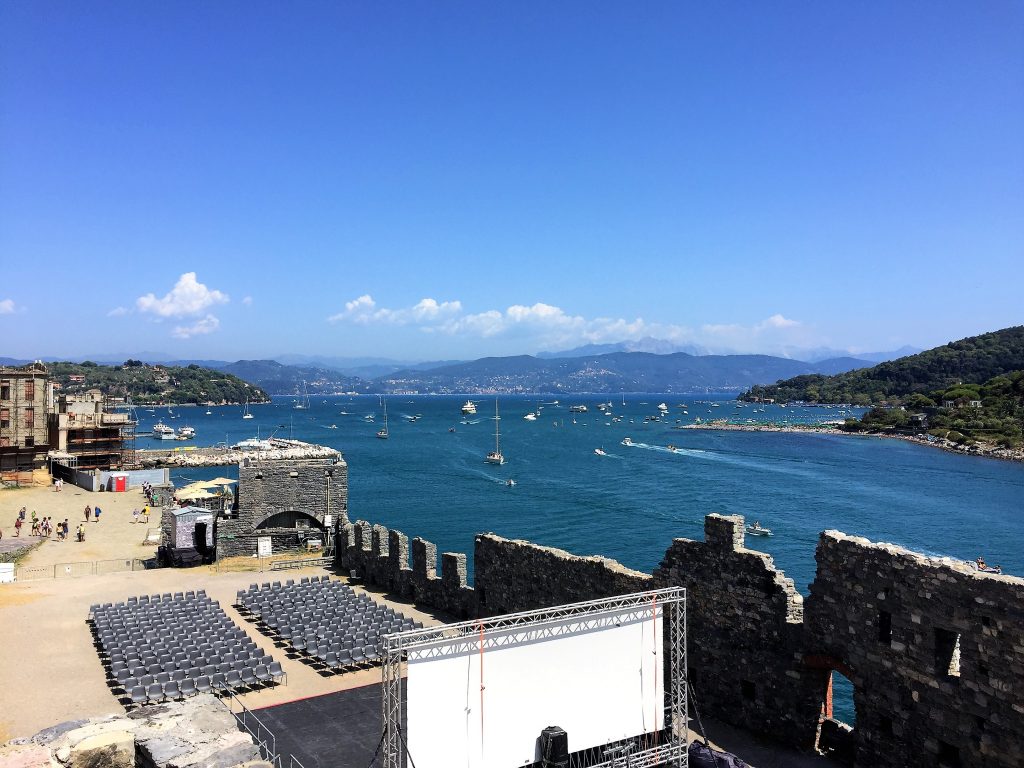 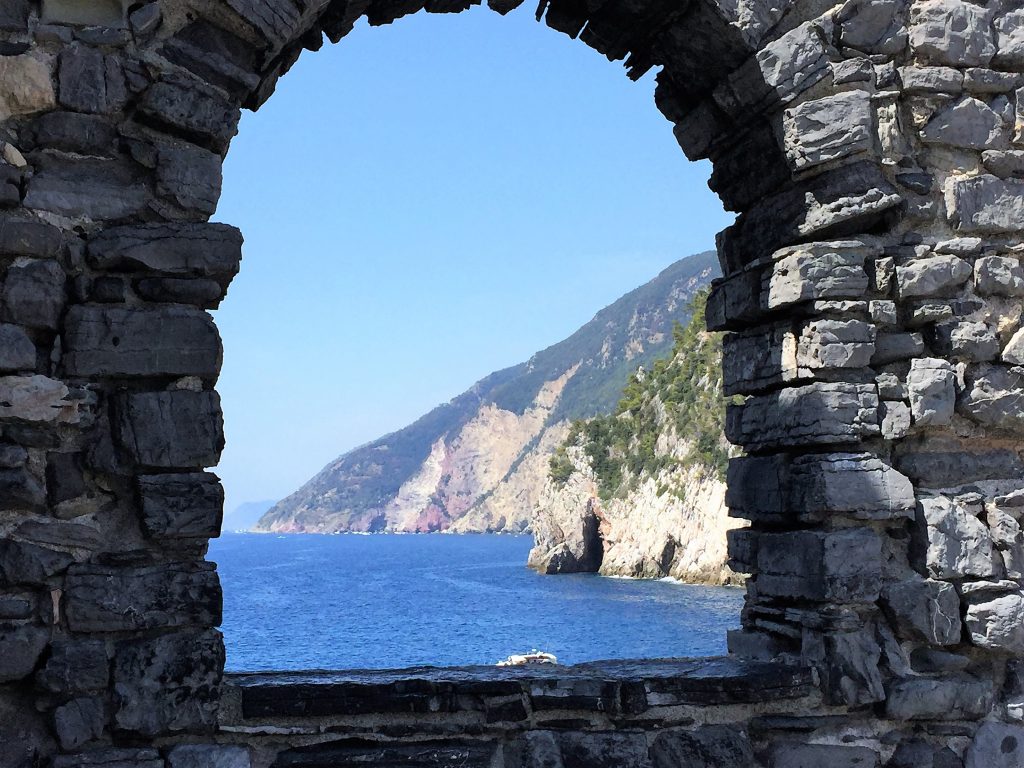 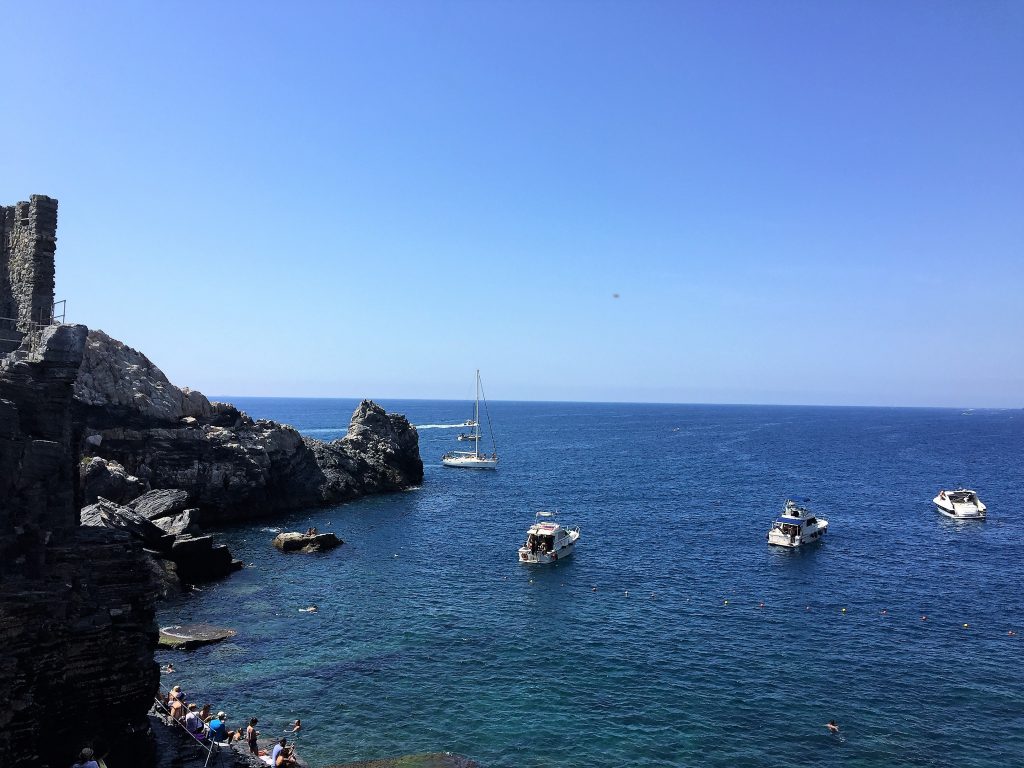 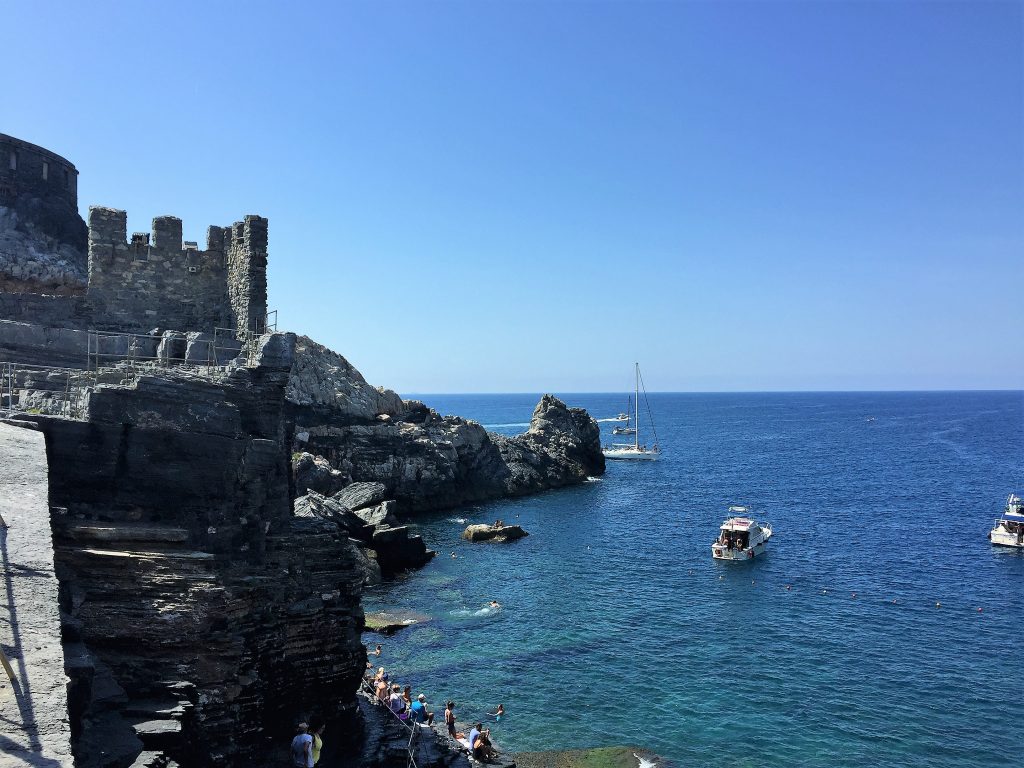 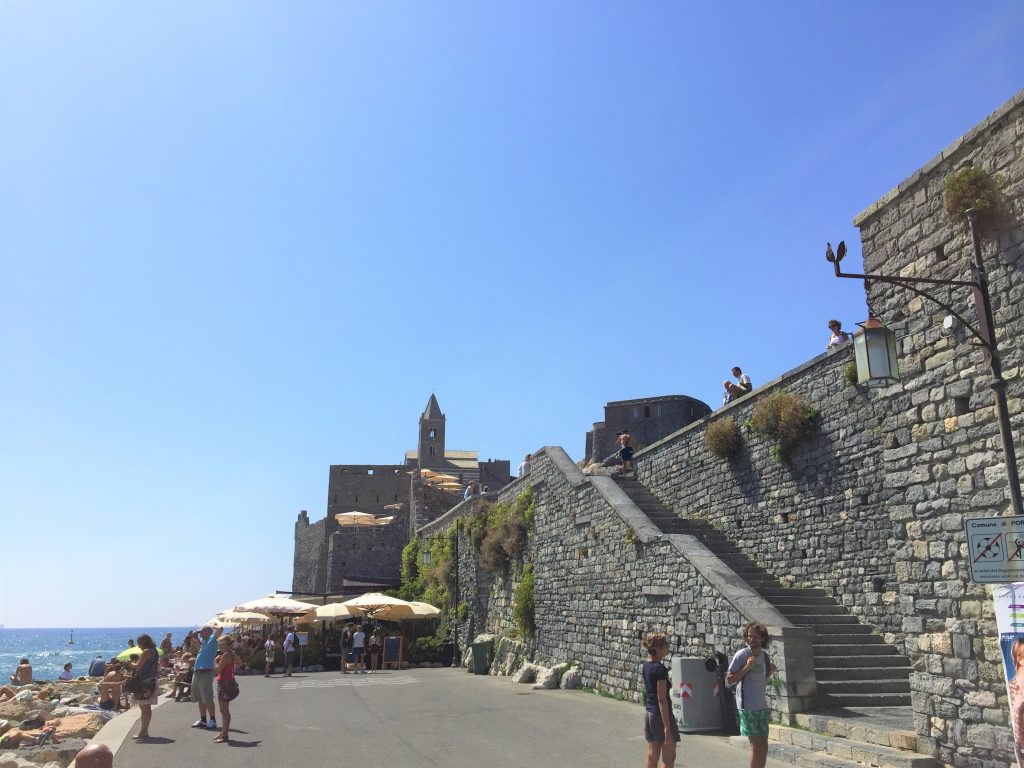 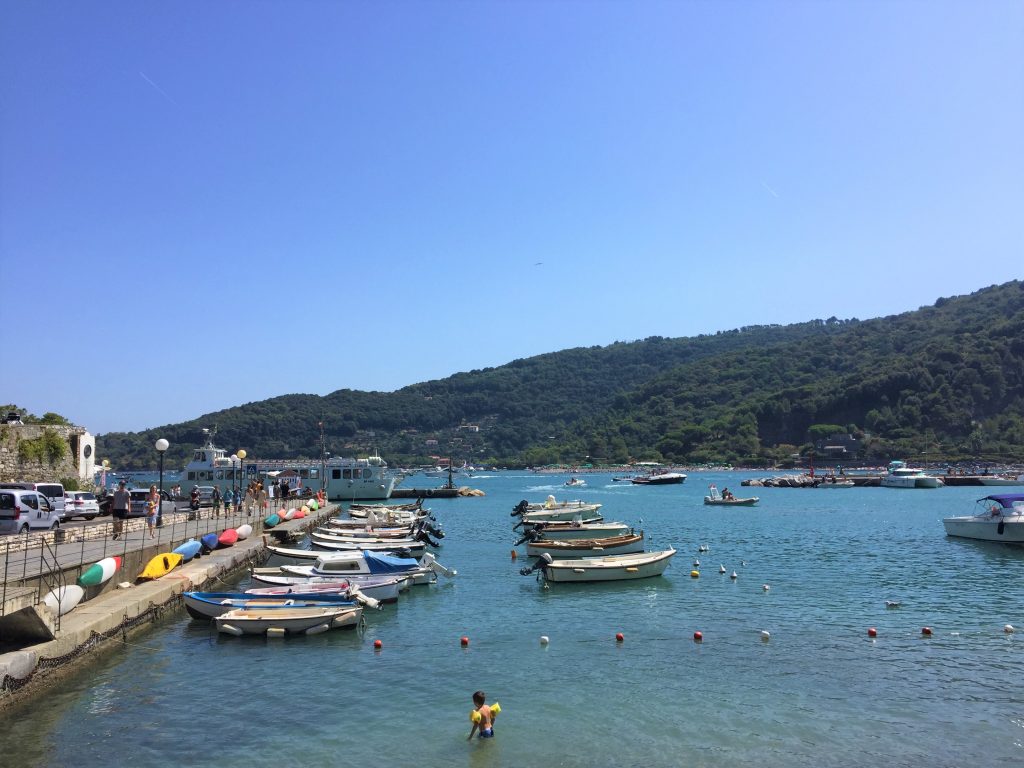 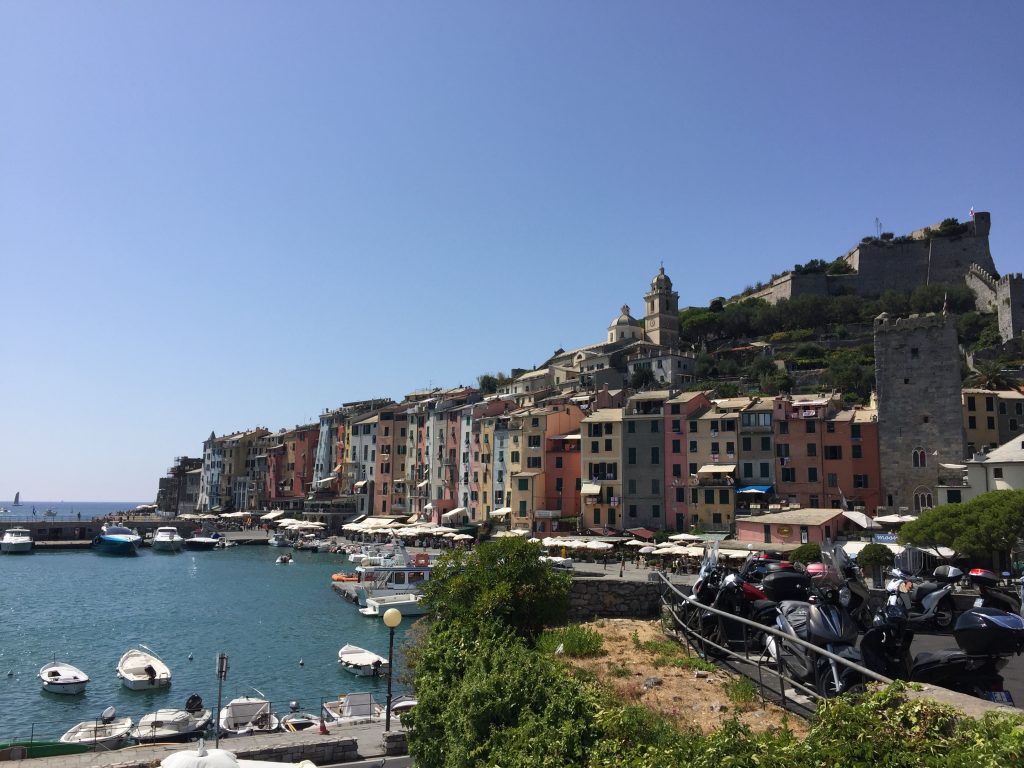